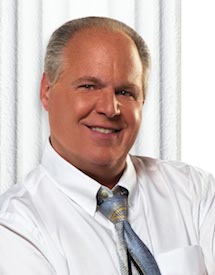 Rush Limbaugh, the “Doctor of Democracy,” is the pioneer of AM radio. Limbaugh revolutionized the media and political landscape with his unprecedented combination of serious discussion of political, cultural and social issues along with satirical and biting humor.

Now one of the most famous voices of conservative radio, Rush Limbaugh was born in Cape Girardeau, Missouri, into a highly regarded local family—including his paternal grandfather, Rush Hudson Limbaugh, who served as a U.S. ambassador to India under President Dwight D. Eisenhower; an uncle who served as a federal judge during Ronald Reagan’s presidency; and his conservative father, Rush Hudson Limbaugh II, who worked as an attorney.

By the time he was 8 years old, Limbaugh set his sights on a career in radio, even though his father thought a more stable career would be better. Limbaugh got his first radio job in high school; using the pseudonym “Rusty Sharpe,” he worked as a deejay for the local station KGMO (co-owned by his father). Following high school, Limbaugh briefly attended Southeast Missouri State University, but left after one year to pursue a radio career.

Following a stint as a ticket salesman for the Kansas City Royals in the mid-1980s, Limbaugh landed a job as an on-air host at KFBK in Sacramento, California. Less than a year later, Limbaugh became Sacramento’s top radio host.

In 1987, the FCC repealed the long-standing Fairness Doctrine, which required both television and radio stations to air for an equal amount of time each side to a political argument. Not long after, Limbaugh left KFBK for ABC Radio Network, bringing his new-found fame and reputation for a strong right-wing ideology.

In addition to his success on the radio, Limbaugh regularly appears as a political commentator on various TV programs and is a published author. His books include See, I Told You So (1993) and The Way Things Ought To Be (1992). Most recently, he has co-authored the Rush Revere series with his wife, Kathryn Rush Limbaugh, which includes Rush Revere and the Presidency (2016) and Rush Revere and the American Revolution (2014).