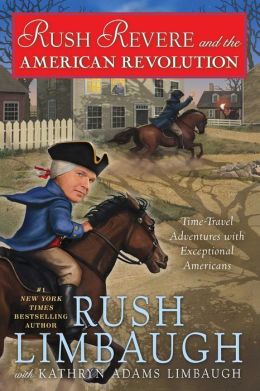 “Freedom is never more than one generation away from extinction. We didn’t pass it to our children in the bloodstream. It must be fought for, protected, and handed on for them to do the same…”

Ronald Reagan sounded this alarm at a time when many Americans began to witness a younger generation slowly separating from the founding ideals of the country. Culture-shifting social change, coupled with a new political landscape, contributed to what many argued was an apathetic, or in some cases even hostile, attitude toward the history and founding principles of the country. Although the study of United States history maintains its perfunctory station in the classrooms of American schools, parents and teachers face the daunting challenge of reconnecting a sometimes distracted and disinterested cohort of young Americans to the fundamental principles of this “Great American Experiment.”

In Rush Revere and the American Revolution, highly-rated talk radio host and best-selling author Rush Limbaugh sets out to meet this challenge with a fast-paced, time-traveling adventure back to the early battles of the Revolutionary War. Along the way, Rush Revere, the enthusiastic, middle school history teacher, introduces his students to the American heroes who, by standing up to the more experienced and better-equipped British soldiers, bravely led the country to independence.

The adventure begins when Rush Revere, along with his students Cam and Freedom, time-jump to April 18, 1775, to witness Paul Revere’s famous midnight ride. Along the way, the group of time travelers finds themselves right in the middle of the action as Revere and others set out to warn the countryside of the pending British advancement. As more adventures ensue, the travelers have a front row seat to the battles of Lexington, Concord, and Bunker Hill, critical early conflicts that were a turning point in the American Revolution.

OK, at this point you may be wondering how exactly does a history teacher and a group of middle school students end up in Boston at the start of the Revolutionary War. Well, on Liberty, of course, Rush Revere’s wise-cracking but loyal horse who has special powers to transport himself and others back in time.  Liberty’s antics during the group’s adventures will keep young readers engaged in the stories, as the horse provides perfectly-timed comic relief, while becoming a trustworthy and beloved friend to his fellow travelers.

Although the book’s main focus is the early battles and heroes of the American Revolution, our team of time travelers also encounter various adventures in the present day. One such story involves young Cam, whose father has just been deployed to Afghanistan. Cam lives on a military base with his mother and is angry and confused about his father leaving the family behind. In addition, Cam is confronted by a much larger bully in the school yard and must find a way to settle a score without resorting to physical confrontation. Limbaugh uses the group’s conversations with the Revolutionary War heroes to help Cam gain a better understanding of his father’s sacrifice. In addition, the unlikely and improbable success of the Continental Army serves as a powerful example for Cam to learn the importance of perseverance when facing a strong and formidable foe.

Each part of the journey is written in a brisk and engaging style, leaving ample room for intrigue and suspense along the way. Limbaugh makes effective use his young readers’ sense of adventure and curiosity by engaging them in the high drama and high stakes events taking place in Boston at this time. With just the right amount of detail and analysis for his middle school audience, Rush Revere ignites in his students a passion for history and for the founding principles that set the nation on its path to independence. Like any great story, the reader is left anticipating what the next chapter will bring in this exciting adventure in early America.

While history books for young readers often focus on the “when, where, what and who” of a particular point in time, Limbaugh goes to great lengths to emphasize the “why” in his account of the American Revolution. During each encounter, the noble sense of civic virtue is reflected in the Patriots’ selfless struggle for freedom and liberty, often accompanied by great risk and sacrifice. This main theme in the book transcends the basic historical accounting of the Revolution and provides young readers with a deeper understanding of what it means to fight for the preservation and defense of our shared principles.