The Way Things Ought to Be 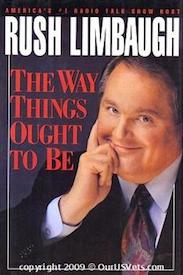 Something dreadful happened in the late 1970s, and I am pleased to admit I played a role. The thing was a crime and an atrocity. Worse, it was critique, a blasphemous critique, a critique of the Established Church of the United States, that is to say of liberalism. The critique was formulated in the 1950s by associates of William F. Buckley, Jr.; and quite properly his sanity was questioned, as was his virtue. Then in the late 1970s a second wave of profane intellects came along, and I was there.

We were equated with criminals. Our criticism of liberals was called liberal- bashing, for when we revealed the fatuities of liberalism, the liberals adjudged it brutal and insidious. By the early 1980s they came to the opinion that something had to be done to end these hostile acts against them. They chose silence; they would ignore our criticism, and so dominant were they in our culture that they got away with it. They had polluted the media, the universities, every area of artistic and intellectual endeavor with their prejudices, bugaboos, and inaccurate ideas. They had replaced American culture with Kultursmog, and in the Kultursmog the criticism of Liberalism did not matter. Rather than respond to it, liberals could misrepresent their critics by alluding ominously to a handful of pinheads from the Ku Klux Klan and other village idiots as the chief critics of their pious piffles.

However, as the 1980s came and went, ever more liberal-bashers arrived on the scene. If liberals ever wondered at the growing abundance of liberal- bashers in the land, they did so behind closed doors. In public they continued to pat themselves on the back and to pollute the public discourse with their contaminated thought: The 1980s! a decade of economic ruin for farmers, blue-collar workers, the common man; Ronald Reagan! a threat-to-the-peace, a tyrant, then a magician, then a dunce; America! racial oppressor, oppressor of ladies, the world’s largest and smelliest men’s club. Wherever the intellectual majority was liberal, no dissent was possible, no ideas were uncontaminated with liberal politics. That is Kultursmog. ’

Now there is another wave of liberal-bashers. They appear on talk radio, where free Americans are allowed to talk back; and they are led by a great force, Rush Limbaugh, ecologist of the Kultursmog, sonorous and debonair liberal-basher. While the liberals have been multiplying pollutants in the Kultur, Limbaugh has been scrubbing the air- waves clean on his nationwide talk show, which attracts the country’s largest radio audience since the advent of television, some 14 million liberty- loving Americanos.

Limbaugh has distilled his wit and good sense into a very readable book, The Way Things Ought to Be. The liberals will not review it, but it bobs atop the bestseller list like a bright cork. Despite its popularity and the huge following its author has attracted, it did not even get mentioned in the New York Times Book Review’s list of 400 notable books for Holiday bibliomaniacs. America’s Kultursmog resists purification. Yet Limbaugh tries. His technique is to treat the victims of Kultursmog with “tough love.” Early on, he confronts his patients:

Everything in this book is right and you must be prepared to confront that reality. You can no longer be an honest liberal after reading this entire masterpiece. Throughout the book you will be challenged, because you will actually be persuaded to the conservative point of view. Whether you can admit this in the end will be a true test of your mettle as a human being. Now get to it.

Limbaugh is one of a kind. He has the skills of a sociologist, which he demonstrates superbly in defining a new variety of Americano, the Uglo- American. “These are not just people of average ugliness,” the great man writes, “We’re talking shocking, revolting, vile ugliness.” But Limbaugh also has an historian’s devotion to Truth:

The vast majority of the American people DID NOT believe Anita Hill. I’ll tell you this: the truth about this whole sordid attempt to destroy a man’s life will eventually find its way into the mainstream press-several respected and accomplishedjournalistsand scholars are already discovering and reporting information that is devastat- ing to Anita Hill-and when it does, you who have supported and believed her will be embarrassed and shocked. Mark my words. In fact, go ahead and mark this place in the book so you can instantly refer to it when the time comes. Go ahead – do it.

(The place in the book is page 120. The time when readers will look back to the place is this spring, when David Brock’s scholarly study of the case comes out).

Limbaugh is a man versed in the philosophical quiddities. In discussing the bogus issue of animal rights, he duly notes:

Rights are either God-given or evolve out of the democratic process. Most rights are based on the ability of people to agree on a social contract,the ability to make and keep agreements. Animals cannot possibly reach such an agreement with other creatures. They cannot respect anyone else’s rights. Therefore they cannot be said to have rights.

Tags: Rush Limbaugh, The Way Things Ought to Be