Let Freedom Ring: Winning the War of Liberty over Liberalism 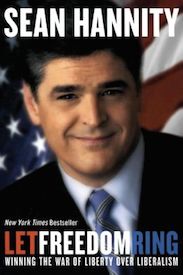 Fans of Fox News Channel’s Hannity and Colmes and ABC Radio’s Sean Hannity Show know that Sean Hannity pulls no punches! In his blockbuster book “Let Freedom Ring: Winning the War of Liberty Over Liberalism,” he comes out swinging, declaring that if the Left prevails in America, the well-being of future generations will be in peril. He proves that liberal ideas have made America more vulnerable and created confusion in our society (and among our children) about what is right and wrong — thus placing our freedom and security at risk.

September 11th, says Hannity, has thrown the errors of liberalism into sharp relief: Americans must decisively reject the Left now, or face nothing less than the final loss of our freedoms. With his trademark forthrightness and courage, he shows here why liberalism is bankrupt on a huge variety of issues: terrorism and national security, border security, the economy, taxes, liberal media bias, environmentalism, education, faith, character and the family, abortion, and more.

Hannity doesn’t just explain why the liberal take on these issues is wrong — he challenges liberal arguments head-on, exposing their fallacies and giving you clear, hard-to-refute comebacks you can use with left-wing family members and coworkers! Even better, he closely examines the careers of some of today’s leading liberal politicians — not just Clinton and Gore, but Daschle and Gephardt too — to show you how they’ve stood against what’s best for America throughout their careers. A few of Hannity’s insights:

What conservatives can and must do to win both the culture war and the war on terrorism — yes, it can be done!

“Sean Hannity writes with a vigor and clarity that inspires. Just start this one … you’ll soon be turning pages. Like mad.” — Rush Limbaugh