Stealing America: What My Experience with Criminal Gangs Taught Me about Obama, Hillary, and the Democratic Party 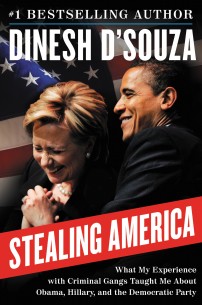 Nearly sixty years after the founding of America, Alexis de Tocqueville famously quipped, “The American Republic will endure until the day Congress discovers that it can bribe the public with the public’s money.” Long before the progressive movement took aim at the country’s wealth, Tocqueville understood the unscrupulous inclinations of men and warned against electing leaders savvy enough to raid the public treasury.

Almost always behind the mask of good intentions, these professional thieves—also known as progressive politicians—use anything and everything to persuade Americans that some injustice, inequity, or wrongdoing in society needs to be remedied. Along with this pitch, they convince the American people that the only way to right these wrongs is to target the wealth-makers of the nation and force them to pay their “fair share”. Once the enemy is identified, the scheme to steal the wealth of the nation is nearly complete.

In Stealing America, bestselling author Dinesh D’Souza sets out to bring this con game to light and to describe the strategies, tactics, and motives of these progressive politicians. No matter the genre, great books are based on great stories, and while D’Souza’s work here includes his usual in-depth research and sharp analysis, Stealing America goes beyond the usual academic assessment to include the author’s personal experience in the American justice system.

D’Souza begins with an inconceivable story of political and judicial abuse of power that ultimately leads to his eight-month sentence in a California detention center. Although a distressful experience, the author is fascinated with the stories of his cellmates and begins to draw disturbingly close parallels to the schemes and motives of the progressive movement in America—specifically those of current standard-bearers Barack Obama and Hillary Clinton.

Each person in the detention center had a story. Although certainly unique in some ways, the circumstances leading to the eventual incarceration of these men formed a collective picture of hard luck, poor choices, and a troubled life of crime and punishment. These prisoners understood power structures quite well and many were members of long-established gangs in both the United States and Mexico.

Through scheming, intimidation, and brute force, these gangs established criminal enterprises hell-bent on getting their “piece of the pie” in a seemingly corrupt and unfair system. Although the stories of these individuals are both interesting and sad, D’Souza soon begins to shift his focus to criminals of a different class: the modern progressive politician.

He begins this work by describing the Founders’ ideal of an anti-theft society, one in which property is earned through determination, innovation, and individual effort, fully protected by the fundamental precepts of American law. This simple principle, established by the signing of the Constitution and the ratification of the Bill of Rights, forms a bulwark against the would-be thievery of plutocrats.

The author goes on to draw distinctions between the common criminal and the progressive politician—the former acquires property through illegal means, while the latter steals wealth through the democratic process. D’Souza catalogs the strategies and tactics of this political con game: foment the anger of the “common man”, pitch noble solutions to the aggrieved masses, gain control of the levers of power, and commence the greatest theft of American wealth since the founding of the country. All done, of course, in the name of justice.

In subsequent chapters, D’Souza details the populist sales pitches of these politicians and brings to light the ulterior motives of this democratic thievery. With comprehensive research and analysis, the author describes the four main themes used recurrently by progressive politicians. These include the well-worn refrains of reparations, income inequality, shared success, and simple good fortune.

No matter the profession, almost all who achieve great success learn the strategies, rules, and tactics of their respective fields by watching and modeling the experts. The world of progressive politics is no exception. D’Souza introduces the reader to the godfather of political agitation, Saul Alinsky. In his comprehensive assessment, the author points back to Alinsky’s mob-like methods designed to extract wealth from both individuals and corporations.

The art of the shakedown, often implemented with callous disregard for anything resembling ethics or integrity, was Alinsky’s trademark. Although a distant figure from the past, D’Souza draws clear and distinct lines from Alinsky to two of his the former protégés—Barack Obama and Hillary Clinton.  The author warns in the final chapters of Stealing America that Alinsky’s ideology and tactics are alive and well in the highest chambers of American political power.

Despite the dire state of political affairs in America, D’Souza provides a way forward. These steps include using all the power of modern media to recognize and expose this progressive con game. In addition, the author encourages engagement in the political process to dislodge incumbent politicians currently involved in progressive thievery.

Although D’Souza acknowledges that the progressive power structures are well entrenched in American politics, he is confident that the ideals and principles that unleashed the country’s entrepreneurial spirit and unprecedented prosperity will prevail once again.
Original CBC review by Bob Macioci