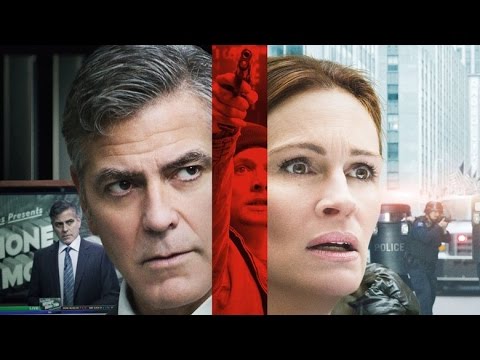 Money Monster arrives onto the big screen with a bang (pun intended), highlighting humanity at its best and worst.  The movie stars George Clooney, Julia Roberts, Jack O’Connell, and is directed by Jodi Foster, and the cast for the crime drama doesn’t disappoint.

IBIS had a “computer glitch”, causing the company to lose 800 million of investor dollars.  As the film progresses, the interplay between Gates and Budwell expands to include IBIS’s spokeswoman and CEO. IBIS’s computer glitch ends up being a result of greed and fraud by the leadership of the organization.  Budwell’s relentless pursuit of answers, and uncanny investigation is the catalyst that discovers the fraud.

In one of the more intense moments of the film, Gates and Budwell’s dialogue escalates and ends with Budwell exclaiming,

Even though Budwell’s character is “the bad guy” in the film, the audience sympathizes with him on his hunt for morality.  Parts of the film’s story lines are a little rough around the edges, and feels a little unbelievable.

I would still highly recommend it, based on the fact that it has a strong cast, a good plot, and quickly gets the point across in 98 minutes.  This movie isn’t ultimately about money; it’s about dignity, morality and humanity