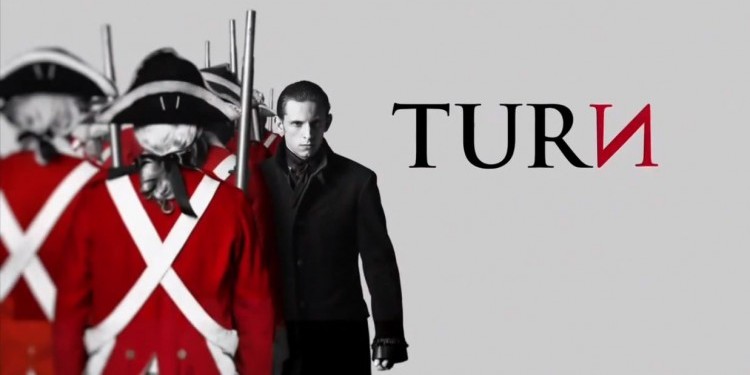 Spies, intrigue, romance, betrayal. Dead drops, invisible ink, and cover-ups. What setting comes to mind when you hear these words? James Bond in a posh Vienna hotel? A Cold War era picture of Berlin or Moscow? How about a small fishing village on the north shore of Long Island in 18th-century America?

While this last backdrop is one of the last locations or time-periods we would associate with espionage and thrilling covert operations, the creators of the television series Turn manage to grab the attention of the viewer with this intense drama of Revolutionary American espionage.

Set in the midst of the American Revolution, this series follows the nascent Republic as it seeks to gain the upper-hand in its war with the greatest empire in world history. We are introduced to the lives of several real historical characters and other fictional composite characters as they undertake covert missions to provide General George Washington with the vital intelligence he needs to make tactical gains in the War for Independence. Benjamin Talmadge, Caleb Brewster, Anna Strong, and Abraham Woodhull are each introduced throughout the first season along with their complex loyalties and motivations which led them to risk their lives, their fortunes, and their sacred honor for the ideal of a free America.

However, the plotline of Turn does not sugar coat the dangerous and often emotional struggles which these patriots faced as they sought to fulfill their sometimes competing duties of loyalty to their families and loyalty to the cause of liberty.

It is easy to think of the Revolution as a period of gentleman and ladies, aristocrats, and valiant citizen soldiers. While this is largely accurate, we often forget what the visceral and passionate struggle between the American Revolutionaries, their fellow citizens who were loyal to the Crown, and the British colonial officials who oversaw them must have been like. All but a minority saw themselves as British. All saw themselves as loyal to the King, Parliament, and the inherited tradition of the British legal system. Yet, some men were driven by their deep loyalty to rebel against what they saw as abuses of their rights. Though they were sundered by the Atlantic Ocean, the American Colonists were just as proud of the noble history of the British Empire, the United Kingdom, and the sacrifices that their forefathers made to beat many a wayward king or nobleman into submission to the rule of law rather than the arbitrary rule of the strongest men.

These patriots chose to take up arms against, and to spy upon, their fellow British brethren because they knew that the ideal of liberty which had been vouchsafed in the Magna Carta and other pivotal documents in British history was bigger than any one man, even a king. However, on a practical level, this commitment to virtue led many colonists to sever sacred trusts with their own family and countrymen in service of a higher loyalty to justice and liberty.

Scholars have estimated that Colonial America was composed of roughly one third patriots, one third loyalists, and one third who attempted to remain neutral. Imagine a spy today knowing that only a third of his fellow Americans agreed with his cause. In the lonely and dangerous hours he spends developing a cover, knowing that at any moment he could be discovered and summarily killed, he would know that only a third of the men and women he worked to protect would honor his sacrifice.  The writers of Turn have done a remarkable job accurately portraying the intense and painful internal struggle that these early American spies underwent in pursuit of higher principles.

However, we not given an overly rosy view of their own motivations and self-discipline in carrying out their mission. They often waffle back and forth between extremes of nearly abandoning Washington and his spy ring, to overzealously carrying out personal vendettas against their enemies at the expense of the mission.

Turn should be a required viewing for all Americans who have ever failed to value the sacrifice our forefathers made in breaking away from the British Empire. Families were destroyed, lives and fortunes lost, and deep friendships shattered. Yet, from the ashes of a broken and fractious colonial settlement arose the greatest nation in human history. It is fitting that the spies portrayed in AMC’s Turn must choose between their own happiness, peace, and comfort and their deeply held commitment to liberty and justice. If this commitment had been less, or their hands less eager to fight for a just cause, then our history would have been radically different as would that of the British people who remained on the other side of the Atlantic.

It is often said that the loss of the American colonies led to a reformation and re-commitment to justice and fair treatment in the British Empire and later in the British Commonwealth countries. This “Second British Empire,” whatever its flaws, was far more evenhanded in its treatment of colonial and commonwealth subjects after it experienced the searing loss of most of its North American colonists. We can also be certain that America would not have been the same beacon of exceptionalism and liberty had we not chosen freedom over friendship with our mother country.

In an abstract sense, most of us are aware of the struggles which had to be endured to “secure the blessings of liberty to ourselves and our posterity”, yet there are few things as powerful as watching the personal dramas that were played out behind the scenes during the Revolution firsthand.  For an intense and fascinating look at these personal and political struggles which helped birth our nation, be sure to tune in to Turn.