Conservative Book Club » Author Interviews » What is the Future of Marriage? (Interview: Jim Daly – President, Focus on the Family)

What is the Future of Marriage? (Interview: Jim Daly – President, Focus on the Family)

Congratulations Jim Daly on the release of your new book, Marriage Done Right: One Man, One Woman!  Can you give us an overview of the book?

Thank you for having me!

Marriage Done Right: One, One Woman takes a look at our country after the Supreme Court redefined marriage in the now landmark Obergefell decision. How did we get here? And for those of us who believe in the wisdom and purpose of marriage the way God defined it – where do we go from here?

I address these questions by taking a look at the history and policies surrounding marriage, but I also go beyond that and examine how marriage can be done well. There’s no such thing as a perfect marriage. But what are the traits of a healthy marriage? How can husbands and wives strengthen their relationships? I do this in part because, in today’s post-Obergefell country, one of the best ways we can show the value of marriage is by modeling it well. 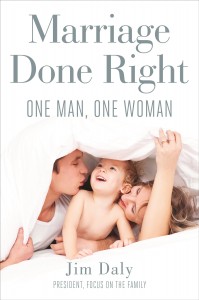 First of all, I’d like readers to come away with a better understanding of marriage. I want them to truly grasp how important marriage is for individuals, children and the culture at large. There truly is nothing like marriage – the blessings bestowed by it cannot be replicated by any other relationship. Society cannot flourish, or even long survive, without stable marriages at its core. In this book, I explain why.

Also, I want readers will be equipped to be better husbands and wives as a result of reading Marriage Done Right. That’s why I tackle tough topics like divorce and the roles of husbands and wives in marriage. It’s why I open up about how my growing up in a dysfunctional home led my wife and I to have some challenges in our marriage, and what we’ve done to overcome those obstacles.

Finally – my desire is for readers to finish the book and have hope. This isn’t a doom-and-gloom book. Yes, when we look at the culture, we see areas where things look bleak. But God’s still in control and He can work through everyday people like you and me to help bring redemption and healing to the culture. He’s given us the gift of marriage, and if we do it well, we will reflect the Gospel to a watching world. The culture is hungry for something beautiful and true – and we have that.

In your opinion, do you believe that the traditional marriage definition will be the law of the land again?

Despite the 5-4 decision, I don’t see the Obergefell case as the final word on same-sex marriage. Cultural views are always in a state of flux and susceptible to shifting opinions. They’re never static, but rather on a pendulum.

So while much of the culture has dispensed with the biblical definition of marriage and family right now, the reality is they can’t change the truth and wisdom of what God designed. We’re already seeing the effects of the Sexual Revolution in broken lives, hurt children and cities that are reeling from fatherlessness. It’s becoming evident that no government program can replace marriage and family.

When will voters connect the dots and realize that no-fault divorce and marriage redefinition don’t make for good public policy? I don’t know. But in the meanwhile, I do know this: you don’t need laws to live out our own marriages well, and to support the marriages in our churches and communities. So let’s do that, even while we continue to make the case marriage in the public square.

In the meantime, what do you think are the implications for free speech and freedom of religion in this country?

History tells us that the normalization of homosexuality and redefinition of marriage always results in the curtailing of religious liberty and free speech for those who oppose it. Not only that, but parental rights are also eroded since this trend opens the door wide for public schools to become a vehicle by which the State promotes same-sex marriage to children. 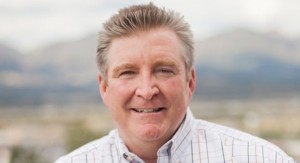 This is why, in their Obergefell dissents, various justices argued that states can’t allow same-sex marriage without discriminating against religious freedom. And they were right: Here in the U.S. we’re seeing Christian merchants targeted for their refusal to participate in same-sex marriage ceremonies, by state agencies and “human rights commissions” which openly punish “discrimination” through one person who acts as judge, jury and executioner. That’s a very un-American concept.

We’ve also seen a Christian counselor booted out of her graduate program for referring homosexual-identified patients to other counselors (when referrals are common in the field) and, most recently, the Obama administration threatening to withdraw billions in federal funding from schools and universities – even private, religious institutions, which don’t comply with a plethora of different mandates and “guidelines.”

These examples help demonstrate why it’s so important to support efforts to shore up our First Amendment rights and carve out protections to people who have religious and moral objections to same-sex marriage. It’s also why we need to help elect state and local representatives who will defend religious liberty during this election cycle.

You are President of Focus on the Family.  What kind of your work does your organization do?

At Focus on the Family, we help families thrive.

We do this by providing provide Bible-based help and resources for couples to build healthy marriages that reflect God’s design, and for parents to raise their children according to morals and values grounded in biblical principles.

You might be familiar with our resources, like our flagship radio program that reaches an estimated 5.5 million people each week, our website and social media outreach, and our family-help specialists and licensed counselors who provided trusted guidance to the tens of thousands of people who reach out to us every year.

Finally, Focus also addresses issues in the culture and provides resources that teach a biblical worldview.