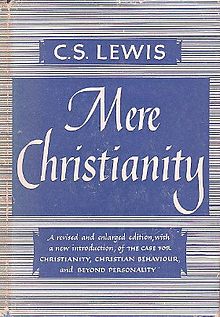 C.S. Lewis’ masterful work Mere Christianity has long been regarded as a classic of Christian writings. It is notable for many things, but one of the most useful facets of its composition is a profound simplicity and clarity of prose. Originally presented as a series of lectures for the BBC between the years 1942 and 1944, the content of the book retains a conversational style that enhances its universal appeal.

Lewis’ intent in the work was to present a strong case for the basic tenants of the Christian faith, accepted by all orthodox Christian branches. It is startling for the modern reader to peruse the pages of this work and find such relevant and prescient issues addressed including sex, marriage, gender roles, and political partisanship, among others.

This relevance gives lie to the common idea that the pre-1960s world was a repressed hot-bed of conformity. Lewis and his contemporaries confronted the same corrupted human impulses and deceptions we encounter in our own time, and thus the work is able to speak to us as powerfully now as ever. The book is also full of timeless wisdom on topics like moral habituation, temptation, pride, virtue, and spiritual transformation.

Mere Christianity is also notable for its clear explanation of the strongest classical arguments for theism in general, and Christianity in particular. However, Lewis did not stop at repeating past arguments; instead he added several compelling original arguments in favor of theism. One of the most powerful is The Argument from Desire found in chapter 10.

This syllogism works off of the basic truth that we all hunger for more fulfillment and happiness than this world actually offers. However, this hunger is not merely a desire for a greater quantity of happiness than we presently partake of. Rather, the hunger is qualitatively superior to the greatest pleasures we actually experience. Recall that sense you had in the back of your mind at your greatest height of ecstasy – a marriage, birth of a child, or the greatest professional recognition of your work. Was there not something in the recesses of your mind asking “Is this as good as it gets?”.

Yet, what other desire is common to all of humanity and yet also so profoundly lacking in human experience? There is a desire for food because there is food. Sexual desire can find fulfillment in sexual intercourse. Yet this longing for eternal happiness that Christianity accounts for is just as common as the desire for food. The hunger pangs for the divine demonstrates the reality of the divine just as do other universal human longings.

This theme arguably pervades the whole of Lewis’ writings. His fictional tales of Narnia and the Space Trilogy all contain thought-provoking passages in which a character is faced with the radical insufficiency of his natural pleasures in satisfying his supernatural longings for joy. It is only after these individuals confront their desire for more that they receive the grace to undertake the excruciating task of surrendering to God. Lewis discusses this surrendering in the last few chapters of Mere Christianity in a way that jettisons empty piety in favor of the true work entailed in practical obedience and devotion to God.

Mere Christianity is no fool-proof treatise for convincing the skeptic, but it does serve the purpose of demolishing virtually every major philosophical objection leveled by critics of Lewis’ day as well as our own. The plain spoken, earnest character of the prose lowers the guard of the hostile objector and lays out the truths of the faith in winsome sublimity. The work has remained a classic for over 60 years for many reasons. The fame of the fictional stories Lewis wrote is one major reason for its continued circulation, but beyond that, the sheer creativity of Lewis’ sanctified imagination exerts a gravitational appeal to the reader even in the midst of rigorous philosophical prose.

The man who once wrote chillingly dark poetry in the depths of the Great War period as an atheist was able to capture the nagging desire for God found in the hearts of even the hardest skeptic. The booming voice of Magdalen College who enthralled the minds of children with his other-worldly allegories of courage and virtue was able to speak to the child-like simplicity of our moral sense and its dependence on a transcendent moral order. The man who spoke with the voice of devils in a prescient work on temptation was able to explain the simple disciplines of moral habituation to which Christ calls us. And the man who divided the solar system into realms of allegorical redemption in the space trilogy was able to cut across the distances of moral intuitions to lay bare our common ethical kinship.

In Mere Christianity, this towering mind of the 20th century argued persuasively in prose style for the ideals and truths he had already brought to life in stories that captivated, and still captivate, the imaginations of millions.