The Last Testament Of Phyllis Schlafly 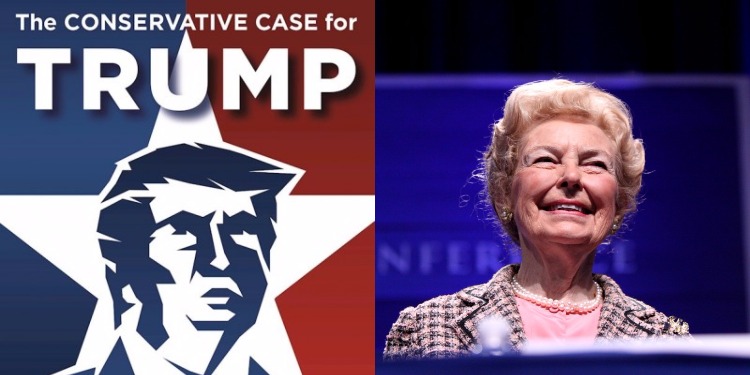 We are so very sorry to learn of Phyllis’ passing.  She was a no doubt the conservative movement’s First Lady and matriarch, and did so much to advance the pro-family movement in America.  What do you believe will be her lasting legacy?

Why did you and her want to write this last testament of hers in your new book, The Conservative Case for Trump?  What is the conservative case for Donald Trump?

Phyllis Schlafly believed in Donald Trump and called him a “last hope” for America.  We wrote to book for conservatives to give them the reasons to be FOR Trump not just against Hillary.  The 10 chapters lay out clearly that, if you believe in American sovereignty and the rule of law, Trump is the man for us at this moment.  The first two chapters – on immigration and trade – are especially important for understanding that we cannot allow four more years of Obama/Clinton.

Do you believe her legacy will be affected by her enthusiastic support for Donald Trump?

Yes, Phyllis Schlafly will be remembered as the greatest conservative leader because she launched the movement in 1964 as the grassroots took on the kingmakers and she finished the job by identifying the man – Trump – who can end the destruction of the kingmakers.

Eagle Forum and other such groups have fought for traditional family values for decades.  What is the status of the pro-family movement today?

The conservative movement has been dominated by the establishment and kingmakers for too long.  Trump is a return to the grassroots and the pro-family movement is about to expand in leadership and impact because conservatives recognize that they can be heard.  The next 25 years will be the most extraordinary time in the pro-family movement: we will roll back the bad laws and will revive the culture!