America Has Already Had A Woman President 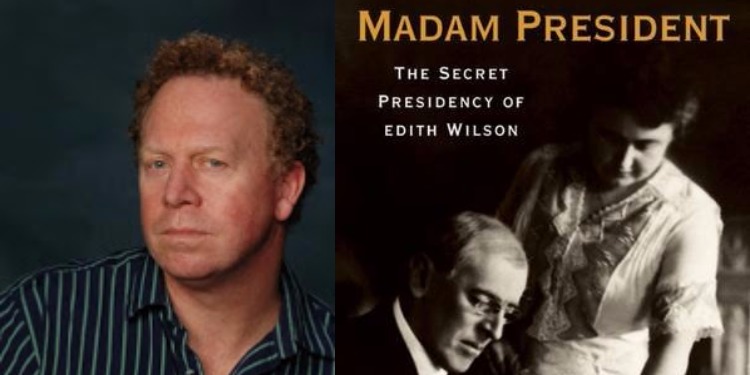 Congratulations William Hazelgrove on your new book Madam President: The Secret Presidency of Edith Wilson!  Give us an overview of your book and tell us why you wrote it.

Madam President: The Secret Presidency of Edith Wilson covers a remarkable time in our history when the United States was secretly run by a woman in a time when women did not have the right to vote.

Woodrow Wilson suffered from a stroke that turned him into a low functioning invalid. His wife of only four years, Edith Wilson, stepped in and ran the government from 1919 to 1921. Edith Wilson had only had two years of schooling, but she was tough and unrelenting.  She became the first female president by proxy, and managed to keep her husband alive and finish World War I – all while keeping the president’s illness a secret.

I wrote this book after reading a biography on Woodrow Wilson that said Edith Wilson was almost the president. This intrigued me, and after some research I realized that Edith was the president when Woodrow Wilson could not govern at all.  I think the relevancy of Edith Wilson’s secret presidency to our looming election is obvious. Edith Wilson is a cautionary tale of what can happen when a president falls ill and someone else must step in to run the White House.

This is an amazing story about how President Woodrow Wilson suffered a stroke and his wife, Edith, began to take on the day-to-day duties of the White House.  Why is this forgotten history?

Edith Wilson’s story is the prime example of what a woman did when her husband fell ill. This is not something Wilsonian historians have embraced. If we say Edith Wilson ran the White House from 1919 to 1921 then it takes away from the legacy of Woodrow Wilson. The implication that the vice president was looked over so the president’s wife could take control would not play well with the American public.

The cover-up was achieved in a way that could not occur today. Not only is it difficult to believe that a woman with just two years of education could run the United States, this also occurred before women had the right to vote.

Did the American citizenry know what was going on?

We have to consider the relationship of the press to the White House in 1919 when Wilson suffered his stroke. The press was not an adversary at the time, but rather they respected presidential privacy. The fact that Woodrow Wilson disappeared is something that actually could occur before mass media.

The public did know that the president had fallen ill, but the president’s personal physician, Dr. Grayson, provided a cover-up by calling the president’s illness “nervous exhaustion,” among other things. Grayson told the press that while Wilson was ill, he would soon recover. He framed it as President Wilson was “run down,” but some papers speculated that he had had some sort of neurological event.  In 1919 little was known about strokes and the only cure for it was bedrest.

Edith and Dr. Grayson kept the cover-up going until beyond 1921. It was so successful that even today few people know that Woodrow Wilson had a stroke while in office, and fewer know that Edith Wilson ran the White House for two years.

You also discuss her role in the Women’s Suffrage Movement.  Can you describe her role and how she helped get the constitutional amendment passed for women to be able to vote?

Edith Wilson’s role with the suffrage movement is complicated.

She was from the South and had certain ideas about how women should behave. She did not approve of the women who were chaining themselves to the White House gates. The irony is that while these women were fighting for the vote by throwing themselves down in front of the presidential limousine or flashing the president with signs hidden under their skirts, the first woman president was running the White House. It is the irony of history that a woman who did not approve of the movement was heading the most powerful country in the world.

What had happened? We can only speculate, but Edith was very practical and told the president that if he believed in something, he should not be held up by the Sabbath or protocol. Woodrow Wilson spoke to Congress, and while the legislation was voted down, many saw this as a turning point.

The biggest impact Edith made was that she unwittingly provided a model that showed women were capable of governing and could even be president.

I believe in telling history in a dramatic way that allows the readers to participate. I would hope that by the end of the book, the reader can draw his or her own conclusion as to whether or not Edith Wilson was the first woman president.  I present my thesis, but I leave it to the reader to make that decision.

I would hope that readers see Edith Wilson as a heroic figure in history. She was told by the doctors that any stress would kill the president and that it was up to her to take over the presidency so that her husband could survive. From that perspective, what choice did she have? She did what women all over the country would do when their husbands fell ill by stepping in and running the family farm or business. In this case, however, the family business was the presidency of the United States.

Finally, I hope that this book illuminates a corner of history that most historians have glossed over and gives the reader some perspective on the present day. A woman did run the country almost a hundred years ago in the United States, and there should be something we can learn from that moment. As many have said before, the past informs the future.