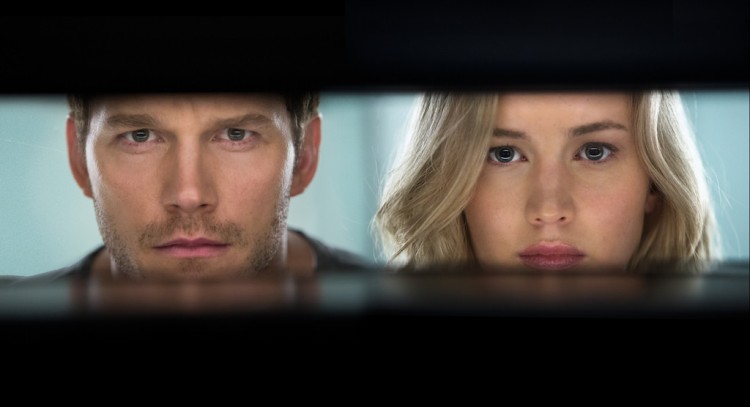 Director Morten Tyldum’s Passengers has all the makings of a great film. The science-fiction tale has two capable actors in Chris Pratt and Jennifer Lawrence, and it was penned by Jon Spaihts (Doctor Strange). Likewise, Tyldum’s recent history includes directing Benedict Cumberbatch in 2014’s The Imitation Game. Unfortunately for distributors Sony/Columbia, moviemaking can be a harsh mistress.

There are many creative peculiarities with Passengers, but perhaps the most glaring is that it was deceptively billed as a science-fiction thriller. In reality, it is more of a romantic drama with sci-fi makeup. Theatergoers expecting to see a story about a man who wakes up early from suspended animation — seemingly under suspect circumstances — received something much more mundane. The movie’s introduction also begins a trend in which every opportunity to take chances or explore big ideas is shunned in favor of safety and predicability.

Passengers starts with an meteor shower that hits the spaceship Avalon, which is on its way to a colony planet called Homestead II. Damage to the ship’s shields causes a power malfunction that wakes mechanical engineer Jim Preston (Pratt) shortly afterward. There’s only one problem: He woke up roughly 90 years too soon.

Jim’s early release from suspended animation propels the movie into territory covered in 2000 with Tom Hanks in Cast Away. The character, played aptly by Pratt, only has has an AI robot named Arthur (Michael Sheen) to keep him from slowly going mad in the vast void of space. It doesn’t work, but the introduction of Aurora Lane (Lawrence) brings him back from the brink.

“Jim and I live in ‘accidental happiness,’ like castaways making their home in strange shores,” Aurora writes in her memoirs. “We all have dreams. We plan our futures like we’re the captains of our fate, but we’re passengers. We go where fate takes us. This isn’t the life we planned, but it’s ours. And for the first time in my life, I don’t feel alone. We weren’t supposed to find each other, but we did. He makes me feel like my life isn’t over. It’s just beginning.”

A big secret Jim keeps from his newfound love is eventually disclosed by Arthur, which temporarily derails their trajectory as a deep-space Adam and Eve. The two come together once again when problems linked to the earlier meteor shower threaten to tear the ship in half. They are briefly aided by Captain Gus Mancuso (Laurence Fishburne), whose deathbed wisdom serves as the impetus for the couple living happily ever after.

Whether one likes or dislikes Passengers ultimately rests on the expectations one has for the movie upon first laying eyes on Avalon. The star quality that propelled both Chris Pratt and Jennifer Lawrence to fame is present, but they have been dealt a script that fails to creatively shoot for the stars. Given crystal clear opportunities to dig down into philosophical issues about artificial intelligence, good versus evil, and the nature of man, writer Spaihts opts for something much more superficial.

Passengers is sufficient for Sunday matinee entertainment, but moviegoers who like to see the intellectual bar raised whenever possible will be frustrated with its wasted potential.