Who Are The Knights of the Golden Circle? (Author Interview with Steve Berry) 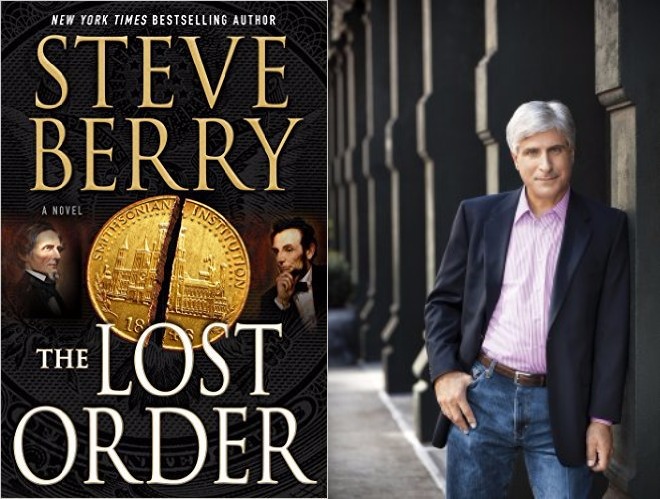 I think the cover copy says it best:

The Knights of the Golden Circle was the largest and most dangerous clandestine organization in American history.  It amassed billions in stolen gold and silver, all buried in hidden caches across the United States.  Since 1865 treasure hunters have searched, but little of that immense wealth has ever been found.

Now, one hundred and sixty years later, two factions of what remains of the Knights of the Golden Circle want that lost treasure—one to spend it for their own ends, the other to preserve it.

Thrust into this battle is former Justice Department agent Cotton Malone, whose connection to the knights is far deeper than he ever imagined.  At the center is the Smithsonian Institution—linked to the knights, its treasure, and Malone himself through an ancestor, a Confederate spy named Angus “Cotton” Adams, whose story holds the key to everything.  Complicating matters are the political ambitions of a reckless Speaker of the House and the bitter widow of a United States Senator, who together are planning radical changes to the country.  And while Malone and Cassiopeia Vitt face the past, ex-president Danny Daniels and Stephanie Nelle confront a new and unexpected challenge, a threat that may cost one of them their life.

From the backrooms of the Smithsonian to the deepest woods in rural Arkansas, and finally up into the rugged mountains of northern New Mexico, The Lost Order is a perilous adventure into our country’s dark past, and a potentially even darker future.

Where did you get your inspiration from to write The Lost Order?

Few things grab people’s attention more than the word Smithsonian.  It connotes adventure, history, and knowledge.  It’s mentioned a lot in novels, but only a handful have included it as intricate to the plot and most of those tend to exaggerate the place.  I wanted to place it front and cent and show it in a more realistic light, while exposing some of its true secrets. Things like:  the 1865 fire, the tunnel beneath the mall, the renovations currently happening within Fossil Hall, and all of the nooks and crannies in the Castle itself, including James Smithson’s crypt.

Tell us about your writing process.  Do you write at a regular time each day, or when you feel inspired, etc?

I’m a morning person, so I write primarily from 6:30 a.m. to 11.  I then stop for an hour, then return for another two hours.  I do that 5 days a week religiously.  I work on the weekends only if I feel like it.  If I don’t, I don’t feel bad about it.  During the week, it doesn’t matter if I feel like it or not, the writing has to be done.

Will your leading character Cotton Malone be making a return any time soon?

Absolutely.  He returns in March 2018 with a really special story.  It’s called The Bishop’s Pawn and will focus on the death of Martin Luther King, Jr.  2018 is the 50th anniversary of the assassination.