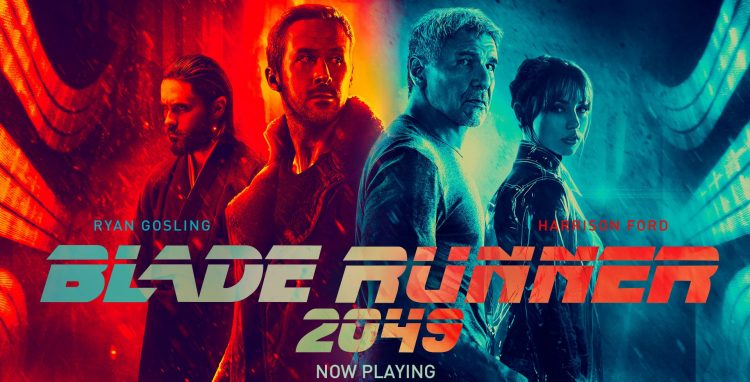 The original Blade Runner failed miserably upon its initial 1982 release. However, in the thirty-five years since then, it has acquired positive reexaminations from film critics, been cut and re-cut into several versions (some good, some bad), influenced a litany of sci-fi films, and seen its cult following blossom into a popular audience. Despite its inauspicious beginning, the film’s ascendance into the mainstream is evident from the recent release of a sequel, Blade Runner 2049.

Set thirty years after Blade Runner, Blade Runner 2049 examines the same basic question as its predecessor: what it means to be human. In the original, Harrison Ford’s protagonist Rick Deckard works as a blade runner, a cop assigned to terminate replicants, artificially created super humans who are illegal on earth.

In the sequel, K, played by Ryan Gosling is the very thing he hunts (Ridley Scott’s definitive version of the original film, “Blade Runner: The Final Cut,” hints that Deckard himself may also be a replicant). An advanced model of replicant programmed to always obey, K works as a blade runner for the LAPD and exterminates older replicants hiding off the grid.  One blade-running escapade leads K into a series of events that make him question whether he was truly created, or in fact, born. At the start, Gosling gives his typical broody-faced performance, as one would expect from an automaton. Thankfully this is only his character’s starting point. As K discovers more about himself and his memories, his emotions build so Gosling can display some explosively convincing acting.

2049 works best when K goes through the rigmarole of understanding of who he is. For a film of such grand scale, it only intermittently veers into action territory and never loses sight of its themes. The script remains sturdy for most of the film, but falters with the return of Harrison Ford’s Deckard in the third act. Though Ford was used in much of the film’s promotion, his appearance fells like little more than a cameo and is followed by a scene that contains a confusing plot point and an unsatisfying twist. The twist in particular makes K’s further understanding of human and replicant nature less impactful.

Though holding a candle to the first movie’s antagonist is a tall order to fill, one can’t help but wish the sequel’s villains measured up a bit more. The original subverted expectations by portraying Deckard as a cold, distant cynic, while Rutger Hauer’s villain Roy Batty seized the screen with a physically intimidating, yet sympathetic performance. This enabled the audience to feel for his struggle with being a replicant, while raising the stakes against Deckard, visibly of lesser strength and resolve.

2049 reverses this and gives us antagonists who seldom feel like an immediate threat to K. Jared Leto and Sylvia Hoeks play the business mogul who creates replicants and his replicant right-hand, respectively. Leto looks memorable, with soulless, blank-white eyes, but doesn’t appear enough to frighten or anger the audience. Hoeks gives a serviceable performance, but lacks the memorable look and genuine menace of Roy Batty.

These criticisms aside,  2049 is worth seeing for its visuals alone. The ecologically devastated vistas, and decadent, impressionistically lit interiors are among of the most arresting visuals rendered this decade. The film’s two and three-quarter hour runtime moves at the original’s glacial pace, but director Denis Villenueve and cinematographer Roger Deakins so elegantly recapture Ridley Scott’s bleak, awe-inspiring vision of the future that viewers probably won’t be checking the time on their phones.

Blade Runner 2049 is not in the same echelon as Blade Runner, but it’s still a respectable sequel that nobody thought would happen. Its deficiencies are made up for by its protagonist’s development, which guides the audience through the movie’s theme of personhood to the conclusion that replicants have humanity. Like all worthy sequels though, it doesn’t get there by aping the original.

Those who enjoy this follow-up should treasure it, given that 2049 has followed in the original’s footsteps with a poor box office run. Any hope for more Blade Runner films is lost, like tears in the rain.