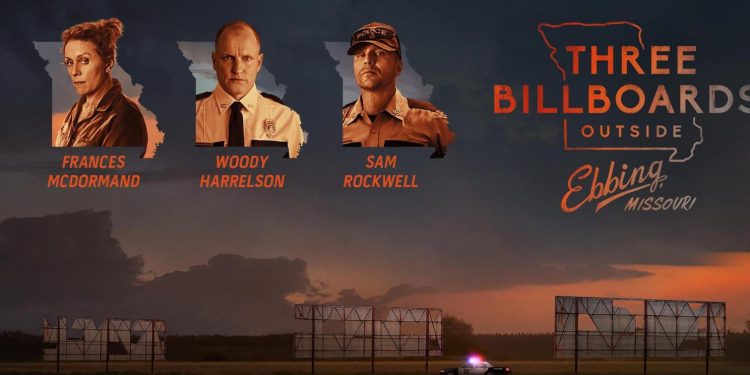 An hour into the slog that was “Three Billboards Outside Ebbing, Missouri,” the lady sitting in front of me turned to her husband and asked, “How much longer is this movie? I really don’t like this.” At least I think it was an hour in. British director Martin McDonagh’s third feature clocks in at just under two hours but is such a chore that it feels twenty minutes longer.

This Oscar bait tells a story tailor-made for PC film critics. Frances McDormand plays Mildred Hayes, a mother grieving from the rape-murder of her teenage daughter. Upset that the local police haven’t made an arrest, she demands action by renting three billboards outside of town, bearing messages chastising the police chief Bill Willoughby, played by Woody Harrelson. Of course, this stunt draws ire from the police force and just about everyone else in Ebbing, Missouri.

“Three Billboards Outside Ebbing, Missouri” tries to address every hot-button issue of the day, but ends up choking on its own ambition. In addition to rape, the film also tries to tackle police brutality and racism, but its blunt and unbelievable approach turns this supposed black comedy into a preachy scolding session. It goes without saying that Hollywood is left-wing, but I can’t remember a recent film that so blatantly emblazoned its lefty credentials on its sleeve.

For example, in one scene Willoughby tells Mildred that if they removed every racist cop from the police force, there would only be three officers left and that they would still hate gays. This film really doesn’t like police. Sam Rockwell plays a buffoonish dirtbag cop named Dixon who lives with his mother, can’t think up a comeback to Mildred’s jabs, and has a history of torturing blacks. When Mildred takes him to task for “torturing n***ers,” Dixon retorts with a lame joke about how he doesn’t torture n***ers, but tortures people of color. It requires such a stretch to believe anybody would say that with no attempt at obfuscation. Rockwell delivers a strong performance as usual, but his efforts are dragged down by McDonagh’s disregard for believability.

Like so many movies that receive undeserved acclaim, “Three Billboards Outside Ebbing, Missouri” doesn’t bother with likeable characters. Mildred is as ugly as her name and McDormand’s Golden Globe winning performance is a one-note bore. Regardless of who she is talking to, she dons the same bitter face and spits nasty comments everywhere she goes. I could accept Mildred’s anger toward the police department, but her relentless unpleasantness made her impossible to root for. I kept reminding myself that I was supposed to root for her because her daughter was raped, but my guilt for hating her evaporated during a scene where she mistreats her depressed son.

Considering McDonagh recently bemoaned the overabundance of “bland PC filmmaking” in Hollywood, I was surprised that “Three Billboards Outside Ebbing, Missouri” can only muster the guts to offend those you’re allowed to offend in 2018, namely cops and white guys. More recently on a podcast, McDonagh said that American films prefer showing somebody exploding than using the expletive “c*nt.” Foul language abounds in “Three Billboards Outside Ebbing, Missouri,” so if McDonagh’s idea of non-PC filmmaking is only down to what the character’s say, he may be right.

Despite all the rough talk, the film’s narrative calculatingly toes the PC line. Spoiler alert: When the film finally gives the cops a brief fair shake, it comes after Willoughby dies of cancer and a black police chief named Abercrombie replaces him. Abercrombie tells Mildred that not all cops are bad, which just comes off as a contrived political gesture. I don’t fault McDonagh for making a left-wing film, but some subtlety would be nice.

Conservatives will likely hate this movie and liberals are bound to adore it, but by any objective standard the film’s last act is messy. It forces the audience to buy that Mildred can Molotov cocktail a police station scot free and that Dixon experiences a redemptive arc overnight when he learns love is the answer. The Dixon transformation is so corny it should have kept McDonagh from winning the Golden Globe for best screenplay.

“Three Billboards Outside Ebbing, Missouri” isn’t entertaining or funny enough to overcome its heavy-handedness. It seems to think that topicality equals profundity and that unpleasantness equals honesty, a combination many critics seem to love. Not this one, in case that wasn’t already clear.