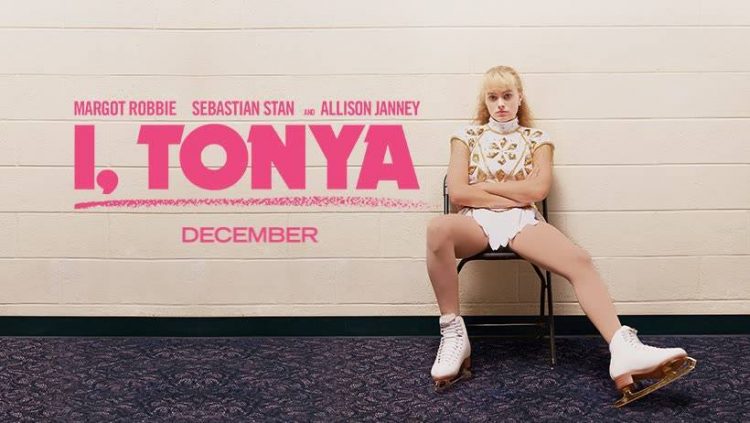 “I, Tonya” is a black comedy that only occasionally makes you laugh with your voice box. It might make you guffaw, but you’ll probably just sit wincing and pinching the bridge of your nose. Starring Margot Robbie as controversial figure skater Tonya Harding, whose career ended when her ex-husband schemed to injure her Olympic teammate and competitor Nancy Kerrigan, “I, Tonya” adeptly combines a rise and fall dramedy with a character study.

“I, Tonya” nails its tone, a mix of acerbic and campy, but works even if it isn’t one’s preferred brand of humor. I compare it to a film like “Jaws.” Even if people no longer think “Jaws” is scary, its characters are so fascinating that it’s hard to not get sucked through their story. The film is structured around mock archival interviews with the main players (played by the actors) within Harding’s inner-circle. It highlights the discrepancies between the accounts regarding Harding’s life and scandal, but ultimately takes the side of its protagonist.

That doesn’t mean the movie is above poking fun at Harding. It shows Harding’s stubborn personality and white-trash persona clashing with the prissy establishment of figure skating. Sometimes, her vulgar and very public outbursts make one wonder how Harding even got as far as she did.

The greatest strength of “I, Tonya” is its actors. After appearing in some less than stellar films since her breakout role in “The Wolf of Wall Street,” Margot Robbie finally builds upon her promise with one of 2017’s best lead performances. She doesn’t look exactly like Tonya Harding, but captures the essence of her character. Whether it’s Harding telling the skating judges, “Suck my d***,” or tearfully begging a judge to not ban her from figure skating, Robbie successfully executes the whole range.

The supporting cast is also one of the best of 2017. Allison Janney dominates every scene she has as LaVonna Golden, Tonya Harding’s abusive mother. Everything about her is memorable: Her angular look, coarse language, poisonous personality, that pet bird on her shoulder. Nobody embodies the movie’s tone like Janney. Her character’s borderline ridiculous appearance adds levity to a character that could have been overly bitter, and Janney’s delivery always manages to land a joke.

“I, Tonya” is honest about the hard life Harding lived and the grotesque people that surrounded her, but manages to find some humanity in them. Sebastian Stan brings creepiness to the role of Harding’s ex-husband Jeff Gillooly, but is upstaged in that department by Paul Walter Hauser as Shawn Eckhardt, Harding’s obese and narcissistic “bodyguard.”

The movie doesn’t humanize them by manipulating the audience into false sympathy, but instead ridicules them as incompetent fools without a plan. Gillooly’s plot against Nancy Kerrigan begins with the intent of mailing intimidating letters, but Eckhardt’s delusions of grandeur mangle it into assaulting Kerrigan. As Gillooly bumbles around trying to avoid implication for himself and Tonya, one cringes at his and Eckhardt’s ineptitude and braces for the consequences to blow up in Harding’s face.

Though Gillooly and Eckhard’s mistakes are tragically funny, when Harding’s career falls to pieces one genuinely sympathizes with her and wishes history took another course. Though the film ends somewhat abruptly, it concludes with a wishful enough note that one doesn’t despair for Harding once the credits roll. Director Craig Gillespie and screenwriter Steven Rogers wisely don’t waste time contriving some mawkish silver lining after the fall from grace and simply remind the audience that Haring has fight in her and how that in itself is enough.

Because of its offbeat tone and unconventional narrative approach, I could see “I, Tonya” being overlooked when discussing great sports movies. It is also one of the best biopics in recent memory and shouldn’t disappear under the radar when discussing either genre. Too bad it’s bound to be overlooked this award season for socially conscious drivel like “Three Billboards Outside Ebbing, Missouri.”