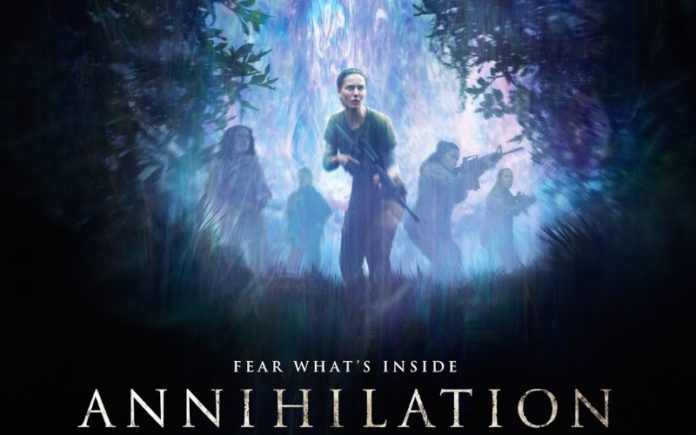 Alex Garland’s latest piece of heady sci-fi is likely to strike people as the kind of film that needs to be seen more than once before passing judgement. For this critic, a second viewing of “Annihilation” provided no more clarity than the first, revealing it as a movie crippled by underdeveloped characters and narrative vagueness.

Based on a novel of the same title by Jeff VanderMeer, “Annihilation” begins with a cellular biology professor and former U.S army soldier named Lena (Natalie Portman) grieving for the loss of her husband Kane (Oscar Isaac), a soldier thought to have been killed on a mission. He turns up after a year and seems unwell, but en route to the hospital Lena and Kane are kidnapped by a scientific research compound studying “The Shimmer,” a quarantined area of wilderness surrounded by an ever-expanding extraterrestrial force field. Lena then finds out that Kane’s mysterious mission was into the shimmer and that he’s the only person to ever emerge from it. She then decides to join a group of female scientists lead by Dr. Ventress (Jennifer Jason Leigh) to find out what’s at its center and find a way to heal her husband.

Though “Annihilation” attempts to tackle weighty themes like life, death, and self-destruction, it gets lost in decadent visuals and stops short of exploring anything interesting about its characters. There is a tantalizing moment when Lena asks Dr. Ventress why she deemed Kane fit to go on a suicide mission into the shimmer, but Ventress replies with some unsatisfying lines about how all humans self-destruct in some aspect of their lives. This renders Kane a cypher the entire movie, not helped by the flaccid chemistry between Isaac and Portman.

Portman’s woodenness makes Lena a bore. After a while during my second viewing, I realized that unless Portman was the only one on screen, my eyes always diverted to one of the other actresses. That said, Jennifer Jason Leigh, Gina Rodriguez, Tessa Thompson, and Tuva Novotny all show plenty of personality and make the best of their roles.

However, one of Rodriguez’s most emotional moments is sabotaged by the aforementioned narrative vagueness that is the albatross around the film’s neck. At the outset of the mission, Lena decides not to tell the team that the one man who emerged from the shimmer is her husband for fear that it will “complicate things.” Though it is revealed that the shimmer causes those who enter to physically and mentally deteriorate, Rodriguez’s deterioration is shown when she freaks out upon discovering Kane’s relation to Lena. Though defenders of “Annihilation” may argue that Rodriguez’s character dwelling on this is simply her insanity kicking in, the movie also makes a big deal about it for some reason. Why Lena didn’t tell the team is anyone’s guess and the movie doesn’t tell you why they would care.

Despite its boring protagonist and sometimes baffling narrative, Alex Garland creates visuals are appropriately shimmery. The landscapes are colorful and lit as it they are from the Book of Genesis. The scenes where the team encounter mutated beasts are successfully suspenseful and the creature effects are also some of the most convincing in recent memory.

After an hour and a half taking the audience on a journey through the shimmer, “Annihilation” arrives at a climax that feels too simple considering the time spent depicting the shimmer as an unstoppable force. By the end, I didn’t feel as if I had gone on a great journey or pondered great questions of life and death. That’s because “Annihilation” isn’t as narratively disciplined as it should be or as intelligent as it thinks it is.