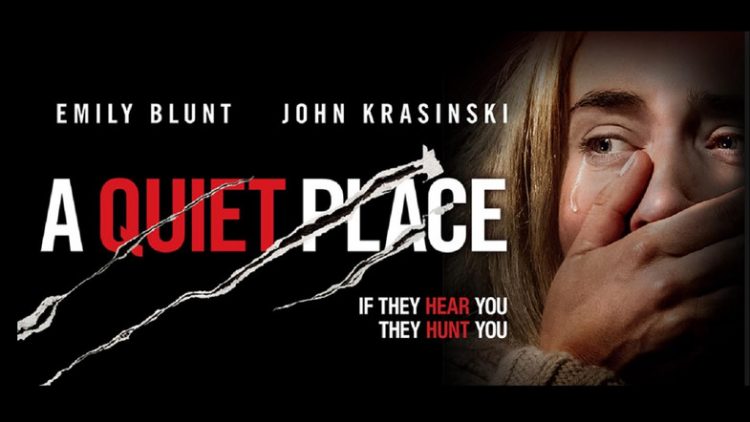 Though “A Quiet Place” has been promoted as a horror film, while watching it I felt more thrilled than scared. That isn’t a criticism however, because despite a narrative hiccup toward the film’s end, actor John Krasinski’s directorial debut is a textbook lesson in suspense and one of the best exhilaration movies in recent memory.

“A Quiet Place” follows the Abbott family’s struggle for survival in the not-too-distant post-apocalyptic future of 2020, where most of the human race has been annihilated by ravenous creatures that hunt exclusively with an extraordinary sense of hearing. The Abbot family patriarch Lee, played by John Krasinski, leads his family in scavenging a nearby town for supplies and sustains them on a farm, all while not making any noise. A year after losing one of their sons to the creatures, Lee’s wife Evelyn, played by Krasinski’s real-life wife Emily Blunt, is in the late stages of pregnancy, their son Marcus begins learning survival techniques from his father, and their deaf daughter Regan struggles with guilt over her brother’s death. At the same time Evelyn reaches her due date, the vicious creatures beset their home and the family must hide, fight, and most importantly, stay quiet.

It probably won’t come as a shock that “A Quiet Place” has very little dialogue. It never comes off as gimmicky though, as there are moments where the actors whisper to each other or talk normally whenever they’re in their sound-proofed basement. Either way, the actors give superb performances that immediately earn sympathy. John Krasinski’s everyman charisma and likeability mixed with intelligent writing make Lee an inspired character. I can’t remember the last time in movies or television a father was portrayed as a competent and credible leader, but Krasinski fills this satisfying order.

Though sometimes Hollywood star couples joining forces onscreen can come off as a giant display of narcissism, casting Emily Blunt alongside her husband works perfectly. The two have effortless chemistry that make Lee and Evelyn a couple the viewers want to succeed through all the danger. Blunt is just as strong as Krasinski and plays the vulnerable pregnant mother as well as the adept protector of children in a way that never feels forced or meant to prove a politically correct point.

The film has no other agenda than to thrill and for that John Krasinski the director earns his medal. Though helped by a script that constantly raises the stakes, Krasinski’s filmmaking makes great use of simultaneous action and treats pain as if it truly hurts. These elements most beautifully come together during a scene where Evelyn goes into labor while the creature hunts her in their family’s house. Though you suspect that she’ll find a way to come out of it alive, Krasinski always makes you second guess.

“A Quiet Place” does have a few flaws, both of which pertain to the monsters. Though the suspense scenes are so well sequenced that any malevolent looking creature would cut it, the film’s “Death Angels” are somewhat disappointing and uninspired. Their physiology, blending arachnid, crustacean, and human, looks like a smaller, discarded concept for the “Cloverfield” monster or the villainous Mutos from 2014’s “Godzilla.” Secondly, after the creatures’ weakness is eventually discovered, a moment arises where the characters could immediately exploit it, but do it later instead.

These detractions don’t change the fact that with “A Quiet Place” is so far, my favorite film of 2018. Despite expecting nothing from the movie’s trailer, Krasinski has subverted my expectations and produced a fine piece of genre filmmaking. So fine, it turns out, that a sequel is in the works. I hope Paramount has the good sense to give Krasinski another round behind the camera.