Movie Review: “Life of the Party” 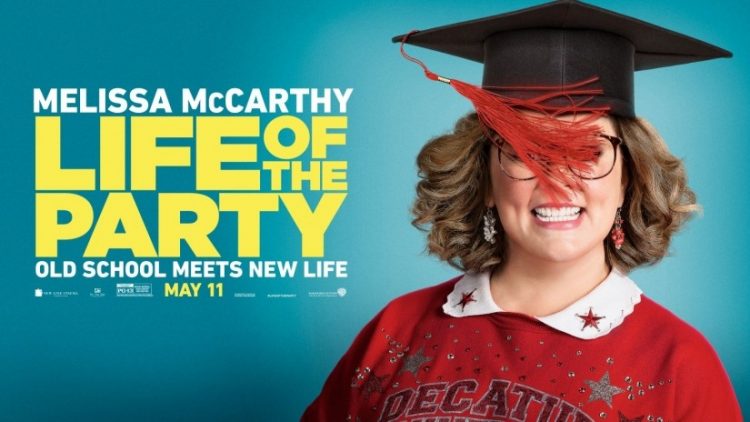 It wouldn’t be fair to begin my review of “Life of the Party” with some silly pun about it being dead, because it’s not that bad. Melissa McCarthy’s latest comedy does have intermittent moments of laughter if you’re willing to wait for them, and the movie probably won’t leave you thinking it’s one of the worst of the year. However, it may make you wonder the last time you saw a movie that was so unremarkable.

“Life of the Party” is the third movie teaming McCarthy with her husband, co-writer and director Ben Falcone. I didn’t see their first two collaborations, 2014’s “Tammy” and 2016’s “The Boss,” but I recall thinking their trailers were preludes to duds and the muted critical reception that followed made me more confident in my decision to stay away. “Life of the Party” cleared the low hurdle of expectations these set, but only just.

The film stars McCarthy as Deanna Miles, a housewife who decides to return to her alma mater and finish her archaeology degree after her husband asks for a divorce. This initially sits uncomfortably with her daughter Maddie, who has started her senior year at the same college, and Deanna has to shake off her awkward, motherly corniness to fit back into the college life and find friendship with her daughter’s sorority sisters.

I reject the assumption that movies can’t get mileage out of familiar premises, but doing so requires a script that contains enough surprising elements to make old territory worth revisiting. “Life of the Party” feels overlong and doesn’t take a fresh enough approach with its “Back to School” premise.  Many events in the movie feel inorganic, but one contrived moment actually manages to land a laugh because of the performances. Unfortunately, the moments where the movie finds its groove are short lived and the lack of narrative momentum leaves the audience patiently waiting for the next laugh to land. Despite the movie’s 1 hour and 47-minute runtime, it feels well over 2 hours.

The movie’s memorable moments tend to arise because the actors, and only a few of them at that. Melissa McCarthy plays the cringe-inducing yet likeable character well enough to root for her at the times the movie does hit its stride. Still, the material sometimes makes her irritating, particularly during an eye-roll worthy scene at a college party where she keeps proclaiming “Equal pay for equal work” and other ham-fisted PC banalities before raising a glass and getting plastered.

Maya Rudolph also manages to elicit occasional laughs as Deanna’s best friend Christine, especially because she’s given some of the movie’s best lines. However, the movie stealer is Gillian Jacobs as Maddie’s sorority sister Helen. Also known as “Coma Girl” for spending eight years in coma, Helen’s manic and unhinged personality makes her the most memorable of Maddie and her friends. That’s said, she has little to compete with since the others could be taken out of the movie and replaced by any semi-attractive girl plucked off the sidewalk.

Despite the best efforts of the movie’s best performers, to say they “save” it would sound like an endorsement, as if to say the movie works despite its faults. Though I did laugh a few times, “Life of the Party” doesn’t work and is likely to leave the viewer on one side of not caring. Considering the high cost of movie tickets these days, I’m reluctant to recommend anybody give it a try just to see which side of not caring they fall on.