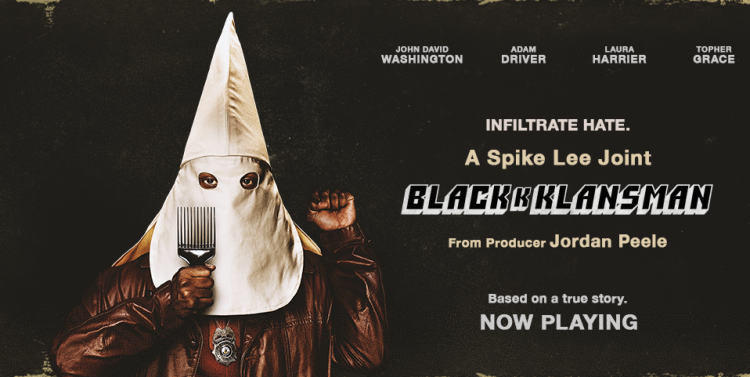 A man by the name of Ron Stallworth in the 1970s became the first black detective with the Colorado Springs Police Department. He soon went on (with his partner) to ingeniously infiltrate the Ku Klux Klan. Fast-forward in time to 2018: Director Spike Lee’s BlacKkKlansman somehow managed to take a great “based on a true story” idea and turn it into a $15 million “Donald Trump is basically a Nazi” propaganda piece.

Once upon a time Spike Lee directed powerful movies like 1998’s He Got Game, starring Denzel Washington. His current project has Denzel’s son, John David Washington, in the lead role but it’s hard to duplicate greatness when one has come down with “Trump Derangement Syndrome.”

“It just cannot be a period piece,” Lee recently told comedian Jimmy Fallon of his decision to link President Trump with white supremacists at the movie’s end. “We had to put stuff in the film that connected, again, to the crazy world we live in today with this crazy guy in the White House. … The so-called President of the United States of
America had an opportunity to condemn hate [after the deadly 2017 Charlottesville protests] and he didn’t do it,” (emphasis mine).

“It was like a horror movie where, you know, the guy calls and says the call is coming from inside the house,” added Topher Grace, who plays David Duke, in an interview with The Hollywood Reporter. “You go, ‘oh my God. The killer’s here.’ It’s like a brilliant move of Spike’s.”

Unfortunately for the “brilliant” Spike Lee, Google exists and the world knows that “killer” and former Democrat Mr. Trump was lavished with praise by Rev. Jesse Jackson of the Rainbow/PUSH coalition prior to his party switch. Hence, why out-of-context snippets of Mr. Trump affixed to the “fo-sure real sh-t”-billed film is likely to sour moderate and right-leaning members of the audience.

Politics aside, Adam Driver as undercover cop Flip Zimmerman, Washington, and the rest of the cast aptly navigated a screenplay that alternates between humorous situations at the expense of backwards racists and the seriousness of their worldview. The plot generally revolves around the absurdity of Stallworth’s phone persona syncing up with Zimmerman’s undercover performance.

Along the way their team stops a number of cross burnings and an attempt to start a race war with stolen military-grade explosives.

The problem for BlacKkKlansman, however, is that its message is muddled without adding President Trump into the mix. On one hand the audience is led to believe that lonely backwoods hicks populate the last remaining remnants of the KKK, aka “The Organization.” On the other hand, Lee’s script (with additional credits to Charlie Wachtel, David Rabinowitz and Kevin Willmott) proposes that America perpetually sits upon a racial powder keg ready to explode into all-out war.

It is only by casting President Trump’s election as the crowning achievement in a shadow race war that BlacKkKlansman retains the illusion of historical relevance.

“Donald Trump is the physical embodiment of what David Duke wanted to achieve and failed,” Mr. Stallworth recently told the left-wing publication Salon with the utmost of confidence.

If one sincerely believes that Mr. Trump wraps himself in white bedsheets while pretending to be a member of the KKK before bed, then Spike Lee’s latest movie is a must-see. Those who aren’t interested in watching multi-million dollar exercises in confirmation bias should stay home.

Here’s to hoping that Spike Lee finds a script that is worthy of both Denzel and John David Washington.