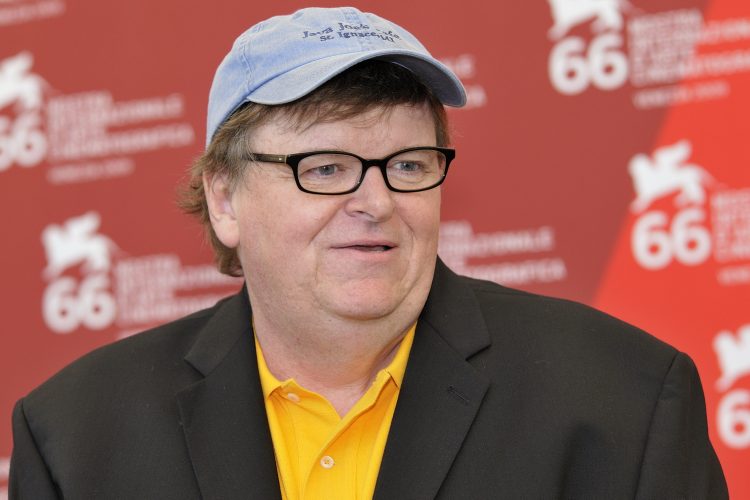 Once upon a time Michael Moore knew exactly who was to blame for all of America’s problems — the National Rifle Association and former President George W. Bush. He focused his ideological firepower into tight shot groups and it translated into the successful Bowling for Columbine (2002) and Fahrenheit 9/11 (2004). These days, however, the election of Donald Trump seems to have left him a lost and confused man, which is why Fahrenheit 11/9 sees him creatively flailing about at almost everyone but socialists like Sen. Bernie Sanders.

Imagine a dart board with all the possible reasons a left-wing ideologue might give for Mr. Trump’s election in 2016. A partial list should include the following: Russia; Second Amendment supporters; white racists; successful businesses; former FBI director James Comey; Fox News; and former Presidents Barack Obama and Bill Clinton not being sufficiently liberal.

Now add singer Gwen Stefani, Flint, Michigan’s water supply crisis, and poor pay for elementary school teachers to the list. Instead of throwing a couple of darts at his idea board and crafting a film around core ideas, Mr. Moore decided to cover everything — even if the end result is cornucopia of disjointed talking points.

“If this is the America we’re trying to save, maybe we need to ask ourselves why,” the writer and director says. “Why save this America? The America I want to save is the America we’ve never had. … Sometimes I guess it takes a Donald Trump to make us wake up and realize that what we need to do is to acknowledge that we have to get rid of the whole rotten system that gave us Trump.”

What makes the whole endeavor even more bizarre is that Mr. Moore spends an inordinate amount of time trying to force links between the rise of Trump and Michigan Governor Rick Snyder. The director surmises that how the governor dealt with the political fallout regarding lead in Flint’s drinking water somehow unleashed Mr. Trump’s inner Nazi.

“[Donald Trump] was the only candidate of the 2016 election, Democratic or Republican, who decided to visit the scene of the crime. Perhaps he wanted to admire the handiwork of fellow Republican Rick Synder,” Mr. Moore says before an expert explains why Trump should be feared as a potential dictator-in-training.

Interestingly enough, the director ultimately condemns the man behind “Hope and Change” as the one responsible for a kind of Hitler and Change.

“The worst thing President Obama did was pave the way for Donald Trump because Donald Trump did not just fall from the sky,” Mr. Moore says. “The road to him was decades in the making. Under President Obama it became OK to imprison whistleblowers more than all previous presidents combined. He used drone strikes to bomb civilian populations, and he deported a record number of immigrants and refugees.”

In short, Fahrenheit 11/9 is Mr. Moore’s attempt to convince moviegoers that America would be a “more perfect union” if it took a page out of Venezuela’s playbook. Nicolas Maduro’s name is never mentioned (nor the nation’s shortages of basic goods), yet Sen. Sanders and New York’s newly famous Democratic Socialist Alexandria Ocasio-Cortez are given editorial halos.

Anyone who yearns for the tightly packaged hit pieces of Mr. Moore’s prime should stay home. Those who want to see the distraught celebrity spray political shotgun shells in every direction, however, may want to give it a go.