Conservative Book Club » History » Backstage at the Lincoln Assassination: The Untold Story of the Actors and Stagehands at Ford’s Theatre

Backstage at the Lincoln Assassination: The Untold Story of the Actors and Stagehands at Ford’s Theatre 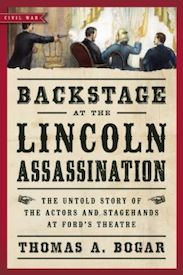 I just finished reading Backstage at the Lincoln Assassination; The Untold Story of the Actors and Stagehands at Ford’s Theatre, a must-read for anyone with an interest in American history. The latest book from Dr. Thomas Bogar is a delightful read for scholars and laypersons alike and manages to bring a new perspective to the worn-out topic of the first American presidential assassination. I had the pleasure of interviewing the author for Townhall previously, and that Q&A can be found here.

Dr. Bogar is a theatre historian with over 40 years of teaching experience, and he approaches Lincoln’s assassination from the “theatre angle” – one which has never been explored before. Backstage at the Lincoln Assassination is the culmination of 8 years of extensive research into the lives of the 46 largely anonymous people who were working at Ford’s Theatre that historic night.

Having just finished the book, I have nothing but praise to offer in my review. Personal tastes aside, there are three reasons why I am convinced Townhall readers would love this read.

1. You will learn something about American history

The entire first chapter is a narrative that not even the most learned Lincoln historians have heard, a fact which is readily apparent when the reader realizes that he is still in the theatre even though Lincoln and Booth have left. The author’s research shows in the details, from the indulgently subversive examination of Ford’s Theatre as “a hotbed of spies and seditious plots” to the simple satisfaction that the story’s characters all finally have names. In addition, the photographs aggregated and reprinted in the book are spectacular.

Not a history buff myself, I can gratefully testify to the accessibility of this amazing historical information to the general reader. When I spoke with Dr. Bogar last week, he confessed that – in a city he wouldn’t name – his server was unaware that Lincoln had been assassinated at all. Lincoln’s assassination, one of the most formative events in our nation’s history, is something every patriotic American should know.

2. There are valuable moral questions

One of the most powerful themes of the book headlines my previous post on the subject: What if the president were assassinated where you worked? The actors and stagehands are given life in a way that invites the reader to examine profound questions and stimulates the mind. Notable instances include:

By exploring everything from the harrowing experience of the workers at Ford’s Theatre to the trade-offs behind the government’s swift investigation, Backstage at the Lincoln Assassination comes ready to provide the reader with a philosophical experience in addition to the more obvious informative one.

3. It is simply well-written

One of the best parts of the book is Dr. Bogar’s knack for imagery, towards which his passion for theatre no doubt plays a part. (For example, no other description of the assassin quite sounds like this: “His hair disheveled, face drained of all color, ebony eyes afire, and lips drawn back over his teeth, he rushed at Hawk…”) The delightful result is that Backstage at the Lincoln Assassination never reads like a history textbook and more like an intriguing novel.