Blue Planet in Green Shackles: What Is Endangered — Climate Or Freedom? 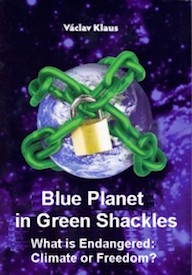 The largest threat to freedom, democracy, the market economy, and prosperity at the beginning of the 21st century is no longer socialism or Communism. It is, instead, the ambitious, arrogant, unscrupulous ideology of environmentalism. So writes Vaclav Klaus, president of the Czech Republic, in “Blue Planet in Green Shackles: What Is Endangered — Climate Or Freedom?” In this brilliantly argued book, Klaus argues that the environmental movement has transformed itself into an ideology that seeks to restrict human activities at any cost, and that policies being proposed to address global warming are both economically harmful — especially to poor nations — and utterly unjustified by current science.

Even through environmentalism boasts about its scientific basis, argues Klaus, it is, in fact, essentially a metaphysical ideology that refuses to see the world, nature, and humankind as they really are. It has no regard for technological progress and takes the current state of the world and nature as an untouchable standard, any changes to which would be a fatal jeopardy. Moreover, the environmentalists’ attitude toward nature is analogous to the Marxist approach to economics: the aim in both cases is to replace free enterprise and individual liberty by the would-be optimal, central, or — using today’s fashionable adjective — global planning of world development. In Blue Planet in Green Shackles, you’ll discover: