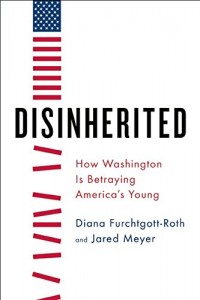 In 2012, the percentage of 18 to 24 year olds living at home reached a historic high of 56%. The unemployment rate among Americans 20 to 24 years old is almost twice as high as the overall rate nationwide. The fact is that American citizens under the age of 30 are facing social and economic consequences unlike any other generation in history. Jobs are hard to find, student debt continues to climb, and hefty taxes consume what little income 20 to 30 year olds can find.

In their most recent book, Disinherited: How Washington is Betraying America’s Young, Diana Furchtgott-Roth and Jared Meyer blame these disastrous problems on a well-intentioned but ill equipped Washington. Together they launch a magnificent confrontation on government and authority at all levels, seeking an explanation for the betrayal of the younger generations of America.

The book is broken down into three main sections which examine the policies and laws that place young people at a disadvantage. According to Roth and Meyer, luxury programs like Medicaid and Social Security place financial burdens on young Americans. Ridiculous regulations on licensing, internships, and minimum wage are keeping young people out of the workforce, impacting their ability to live independently, start a family, and put dollars into the economy. Finally, Roth and Meyer argue that both primary and secondary education are repeatedly failing to prepare students for the world stage of academic competition, while simultaneously driving citizens into more and more debt.

Readers may be disappointed by the conclusion, however, as Roth and Meyer offer broad solutions that fail to account for the complexity of these problems; they come across as mere outlines rather than concrete plans. Still, in an effort to bring accountability to authority, Roth and Meyer balance firm reprimands with compassion as they acknowledge the good intentions behind the over-reaching regulations and massive amounts of spending, while firmly maintaining that injustices are occurring.

Unlike a typical “all politicians are awful, and government is the worst” political commentary, Roth and Meyer admit that the blame is to be shared by everyone. Authority put the laws and standards in place, but young people allow the problems to continue when they fail to vote and remain inactive in the political sphere. The unemployment reports and student debt testimonials don’t lie, and while some readers’ eyes might gloss over at the massive amounts of statistics, the fact remains that America’s youth is in trouble.

Roth and Meyer say it best when they state, “A nation that prides itself on its future has mortgaged it. A nation that historically took pride in its youth culture has become a nation that steals from its young. People who should have fulfilling productive lives are sidelined, unemployed, or underemployed”. It is clear that something must be done, even if they are unclear on how to achieve that change.

Everyone is to blame for this betrayal, and it will take effort from everyone to undo the financial and social damages that have held back young Americans – all the way down to parents and teachers who interact with young people every day. Witty quips and passionate declarations make it easy for any reader to identify the flaws in many leading policies today. Roth and Meyer make a rousing and persuasive call for American youth to take back what belongs to them, reclaim their inheritance, and save themselves from the tyranny of older generations.