End of Discussion: How the Left’s Outrage Industry Shuts Down Debate, Manipulates Voters, and Makes America Less Free (and Fun) 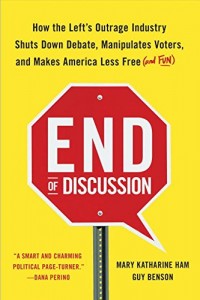 Normally, a book like End of Discussion would be a nice stocking-stuffer, but Christmas is too far away. The new book, written by Mary Katharine Ham and Guy Benson, explains that the left really wants to shut us up – or those of us who don’t hew to their talking points du jour.

The left is about power and control.  Language, ideas, discourse, and debate need to be controlled – by the left.  Opposing words and ideas forbidden in public discourse.  The speakers or writers of the forbidden are to be ridiculed, slandered, marginalized and crushed..

Ham and Benson’s book is a smart and entertaining primer on a highly politicized and anti-freedom minority’s infiltration of the academy, media, sciences, arts and entertainment.  The book offers clear examples of how these real life Orwellian characters tirelessly police speech and bully anyone who dares utter a syllable that deviates from their party line. .

In explaining the book’s title, Ham and Benson write that “Instead of engaging in the rich American tradition of a loud, raucous, messy, free speech free-for-all, we have begun to spend a disturbing amount of our speech just flagging the speech of others.  The object is no longer to argue one’s own side of any issue passionately, but to argue that the other side should not argue.”

Here, Ham and Benson are being too generous.  “We” is really “they,” and they are the left, with all its statist impulses.  Examples of the right shutting down discussion?  Slim pickings.

Bill Maher came crosswise Americans (and not just conservatives)  when, shortly after 9/11, the host of Politically Incorrect took issue with President George W. Bush branding the jetliners’ hijackers as cowards.  Maher suggested that launching missiles from a safe distance better fit the description of cowardly.  The blowback from Maher’s comments was swift and hard.  But there was context.  The U.S. had just been attacked.  Two thousand plus Americans died on their own soil.  Emotions were running high.  The left shutting down speech is routine and, at the highest levels, programmatic, separated from the emotional context of 9/11’s aftermath.

But the “we/they” faux pas doesn’t mar what gives the End of Discussion heft and true value: stellar examples of the “Outrage Circus” shutting down debate – and the debaters who don’t share the left’s ideologically-polluted worldview.  Whether it is women’s issues, abortion, transgenderism–the left’s latest cause celebre, race – or a thousand and one other issues, great and small, Ham and Benson do a solid job dissecting what’s behind the ginned-up outrage and bully-boy (err, “bully-person”) tactics of a movement that knows it can’t win arguments on merits.