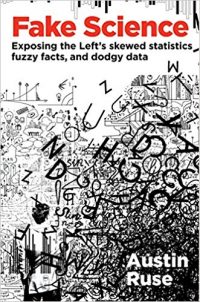 In a world of fake news, conservatives also need to watch out for the encroaching threat of fake science. The Left claims to believe solely in the scientific truth — but their ideas are tainted by false positives, ignoring contradictory results, and the blatant manipulation of facts.

Austin Ruse takes on the liberal cult of fake science in his new book, Fake Science: Exposing the Left’s Skewed Statistics, Fuzzy Facts, and Dodgy Data, exposing it for what it really is: a group of men in lab coats pushing the liberal narrative at whatever cost to the rest of humanity.

It’s not easy to take on the cult of science without being blackballed from all reputable organizations, as Ruse explores in countless details in Fake Science. Any brave men or women who dared to ask too many questions to publish results that contradicted the accepted narrative could see their jobs taken away, their names smeared, and their careers crushed.

Ruse uses a remarkable amount of data and studies to highlight how the matter isn’t quite as settled as the Left claims they are on issues like climate change, transgenderism, polling, and more. No stone is left unturned as Ruse explores the topics that are truly affecting our lives every day, and how fake science is only hurting us further.

Take the transgender movement, as Ruse does in chapter 2, and look at the countless studies throughout time that have found higher rates of suicide for people that undergo sex change operations. Take abortion, seen in chapter 4, and look at the facts of when a baby in the womb can feel pain, and when life really starts. Even water pollution has been hijacked by the Left’s fake science rhetoric. Water catches on fire solely because of fracking? Not so fast, Jack. As usual, there’s more to the story that “science” isn’t telling you.

Scientific journals are supposed to be infallible because they are peer reviewed, right? Wrong. What happens when a well-meaning scientist finds evidence that contradicts the narrative the rest of the scientists are trying to push, whether it be on climate change or abortion or fracking? Well, more often than not, that paper will get rejected by peer review and ultimately never see the light of day. That, Ruse shows in his book, is why the cult of science has been so successful. They have a built in mechanism to keep out evidence they don’t agree with and allow in evidence that fits their narrative, even if the data is fault at best.

Ruse exposes the cult of science for what it truly is in Fake Science, and takes the reader deep into the underlying facts of the issues that are affecting us every day. He looks at sex changes and poverty prevention and political polling and overpopulation, and he does it with a keen eye for the truth and for healthy discourse.

If you’re tired of liberals trying to tell you that the science is settled and X is true and Y is false, pick up this book now. Learn the facts, study the figures, and be prepared to present a great argument that will show once and for all that just because one study said it is true doesn’t mean it is unquestionable.  Fake Science is the perfect book for anyone who doesn’t accept the narrative shoved down their throat and every reader who wants to be informed for themselves.