Conservative Book Club » Faith & Family » Finding Peter: A True Story of the Hand of Providence and Evidence of Life after Death

Finding Peter: A True Story of the Hand of Providence and Evidence of Life after Death 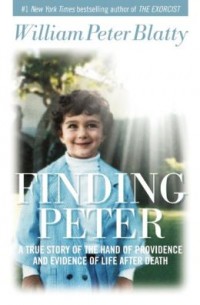 Coincidence or Providence?  Now more than ever, the question – let’s say – bedevils the Western World.  Is there a God?  Is there an afterlife to which we go?  Or is life a cosmic accident?  Do we lose our loved ones – our very selves – in death forever?

William Peter Blatty, who penned The Exorcist, has written a book that tackles these vital questions.  But Finding Peter is no dry-as-dust tome.  It’s a story about a life – Blatty’s.  It’s less about knockings in the night, premonitions in dreams, and the odd or outright eerie occurrence with the twisted road that leads to awareness, which, with the death of Blatty’s adolescent son, Peter, leads to enlightenment and consolation.

In his telling, Blatty’s life is salted, here and there, with incidences that at the time or taken in isolation seem fortuitous, but in hindsight point directions.

For Blatty, the son of poor Lebanese immigrant parents (his father abandoned the family when Blatty was little), his road went from Depression era New York’s lower East Side and Brooklyn to notably Georgetown University, the U.S. Air Force, the U.S. Information Agency, Hollywood, and then the world of literature.  Chance encounters and happenstance along the way led him into writing, a career he hadn’t anticipated.  But what others might assign as luck, Blatty would come to see as “The Plan”; the hand of God at work.

Luck?  It was as a Georgetown undergraduate that Blatty learned about the real-life exorcism of a Maryland boy in 1949.  The true story would serve as the basis of Blatty’s blockbuster novel.  The boy’s exorcism was in the back of Blatty’s mind for nearly 20 years.  Only a slump in Blatty’s fortunes as a big screen comedy writer (yes, comedy) turned his talents to creating The Exorcist.

It was at a New Year’s party that Blatty had a chance encounter with Marc Jaffe, who ran Bantam Books’ editorial department.  Blatty hadn’t been to a New Year’s Eve celebration in many years.  Jaffe would arrange to publish comedic writer Blatty’s dead serious novel about demon possession.  The novel languished upon release, only to find an audience after Blatty got a last-minute booking on the Dick Cavett Show.

The final third of the book deals with Peter’s loss.  Blatty recounts his son with much tenderness.  Incidences after Peter’s death, signs and dreams, convinced Blatty, his wife, family, and friends that death doesn’t extinguish the spirit.  Blatty leaves it up to readers to decide though.

Blatty says he wrote Finding Peter for those who grieve the deaths of loved ones, particularly a child’s loss.  Perhaps Blatty’s long road through life destined him to write Finding Peter – to illuminate and comfort.  Coincidence or providence?  You must decide.