Flyover Nation: You Can’t Run a Country You’ve Never Been To 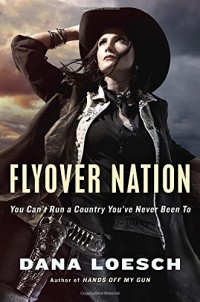 Loesch suggests that there are two Americas: The Coastals who consist of leftist, snobby, city dwellers removed from the rest of the country and Flyover Nation, the down to earth, god fearing, small town people that have common sense and believe in quaint ideas like hard work, patriotism, and the right to bear arms.

The motto of Flyover Nation is that “You can’t run a country you’ve never been to” and it attempts to show that there is a disconnect from city people of, say, New York City and the people in small town cities across most of the United States. The book strives to explain how the leftist coastal elites attempt to run our country by their standards and the needs of the city people rather than the people of Flyover Nation. Loesch amusingly comments that the only time many of the big senators and politicians see Flyover Nation is when they look down from their airplane while flying coast to coast — hence the title.

Almost all of Flyover Nation’s chapters begin with a past experience of Loesch’s, usually one that involves her family in their small Flyover town. From there Loesch will talk about a value that she learned from her past experiences with her family before going into an attack on the coastal leftists that want to remove or diminish the values of Flyover Nation. This leads to a situation in which Loesch spends much of her book attacking liberal ideas of the coastals. While these segments are usually entertaining they can sometimes come across as more of a rant against a liberal agenda than an attempt to prove one of her points. However, despite sometimes feeling like chapters of numerous rants, the book delivers excellent points about the growing differences between many of Americans.

One of Loesch’s most memorable points is that many of our political leaders have forgotten where they have come from, failing to remember the values of Flyover Nation in attempts to appeal the agendas of the coastal elite. Of course, not all coastals or cities are brainwashed but the majority of coastals are always trying to coax those of Flyover Nation into their lifestyle.

It is important to be careful, Loesch warns, saying “So take the kids to DC– just for a short trip. Soak up that pride in the American dream, and carry it home in your hearts. Because DC is not the heart of America–Flyover Nation is. And spare a thought for the folks you see scurrying in and out of the government buildings in Washington, the folks who’ve been there too long. Maybe they had dreams once too. They were like those bugs I saw droning toward the zapper on my grandparents’ porch– they got sucked in and had the life zapped out of them.”

Flyover Nation is a shout out to all the small town cities across America and the people that America is really made up of, the people that the media forgets and ignores. Dana Loesch brings an impressive array of fiery common sense arguments against the coastal elite that makes for a great read as well as a fun one.