For the Glory: Eric Liddell’s Journey from Olympic Champion to Modern Martyr 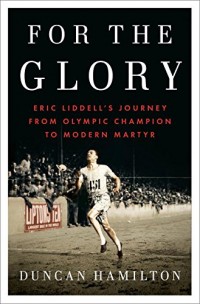 What little people know of the great British sprinter Eric Liddell came from classic movie, Chariots of Fire. In that movie, an iconic song accompanies Liddell as he bucks the odds and wins an Olympic event he hardly trained for. Everything after that great victory is reduced to a chilling white-lettered prologue: ERIC LIDDELL, MISSIONARY, DIED IN OCCUPIED CHINA AT THE END OF WORLD WAR II. ALL OF SCOTLAND MOURNED.

So what happened, that one who attained the Olympic crown of laurels would end his days with a martyr’s crown of thorns? Duncan Hamilton, a prize-winning sports writer in the UK, has taken it upon himself to tell that story—a story that tells of purposes greater than prizes and causes greater than that of country.

Eric Liddell was born far from the race track, on the mission fields of China. This unusual upbringing would shape Liddell’s identity—while he took great pride in his family’s native Scotland, he was first and foremost a Christian. The supreme work ethic that enabled Liddell to thrive academically, athletically, and spiritually—all at the same time—was learned at the feet of parents who seemingly spent all of their waking hours sharing good news of Jesus Christ with those in a foreign land.

Liddell’s life always seemed caught betwixt two paths—the most notable being the path of 100 meter fame and that of a 400 meter failure.  Liddell, already under-experienced compared to most of his competitors, backed out of his signature Olympic event because one of the heats fell on the Sabbath, breaking a biblical command that Liddell held dear. Instead, to the scorn of the multitudes, he signed on to an event—the 400 meters—that he had hardly ever raced before.

The rest is history. The Scotsman with old-fashioned mores and an unorthodox running form ran his way to Olympic gold and fame that extended from his homeland to his mission field and eventually, his captors as well. His feat was extraordinary and there were endless opportunities to capitalize on his fame. Yet he bypassed the endorsements, the popular media events, the lofty positions of grandeur—all to return to the land of his youth.

What awaited Liddell in China? Poverty, as well as anti-colonial rebellion that made any work in China—including missionary work—quite dangerous.  The good news of Jesus Christ was associated with cultural imperialism, much like it is in the academic enclaves of the West today. Even as Liddell gave himself to this work, some Olympic athletes traveled to the Far East to test their mettle against Liddell and often came out worse for the wear.

During these years, Liddell married and began a family. Unfortunately, the rigors of Liddell’s work often brought him to areas of China where he could not take his family. He missed them terribly and savored those brief seasons he enjoyed with them. The hardest moment came when Liddell was again caught betwixt two paths—keeping his family with him as the situation in China deteriorated into outright war with Japan, or sending his precious family to safety in the West. He chose the latter, leading to a heartwrenching goodbye to both his young daughter and his pregnant wife.

Not long after his family was gone, Liddell and his fellow Westerners were first cut off from the surrounding countryside by the Japanese and then interned in a camp as Japanese prisoners. There, amidst wretched conditions, Liddell worked himself to the bone caring for fellow prisoners and sent brief notes to his family in Canada, providing a sunny glimpse into something hellish. His wife tried to send him a lonely portrait of his family, including his newborn, but it never arrived.

Liddell, like the rest of the prisoners, was slowly starving. Unlike the rest of the prisoners, he also had a brain tumor that further ravaged his impoverished body. Even as he was dying, Liddell would race against fellow prisoners in order to sustain morale in the camp—and he would win. Eric Liddell died on February 21st, 1945. According to a fellow missionary, his final words were fittingly “It’s complete surrender.” He then surrendered the last of his life to his Lord.

The greatness of a man is measured not in the glory he attains, but in the glory he is willing to forfeit. Eric Liddell traded the Olympic crown of glory for a martyr’s crown of thorns, keeping in view the mercy of Jesus Christ, who traded His own crown of divine glory for a crown of cruel thorns. Liddell lived for a Lord much greater than himself—One who died that Liddell and others might live. There are things greater than Olympic gold.

Hamilton conveys the tragedy and the glory of Liddell’s life in both stunning detail and with moving emotion — from his farewell to his family to his death in a Japanese camp. Such a book makes clear the devotion Liddell had to God, and the way that this devotion helped him persevere as long as he could under dire and terrible persecution. Hamilton gives us the hagiography of a modern martyr.

“I have fought the good fight, I have finished the race, I have kept the faith. Henceforth there is laid up for me the crown of righteousness, which the Lord, the righteous judge, will award to me on that Day, and not only to me but also to all who have loved his appearing.” (1 Timothy 4:7-8)