Conservative Book Club » Economics & Free Markets » For the Least of These: A Biblical Answer to Poverty

For the Least of These: A Biblical Answer to Poverty 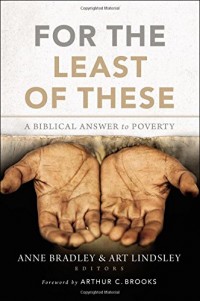 Jesus is abundantly clear in the Gospels that Christians must care for the poor. But what, exactly, does that mean? Editors Anne  Bradley and Art Lindsley of the Institute for Faith, Work & Economics asked 15 leading Christian historians, theologians, economists, and practitioners to answer this fundamental question and more in “For the Least of These: A Biblical Answer to Poverty.”

But before delving into the best methods for alleviating poverty worldwide, the book begins by examining key biblical passages about poverty in both the Old and New Testaments. It doesn’t address every passage, of course, because if we are to accept famous pastor and author Rick Warren’s count, Scripture has some 2,000 verses dealing with the poor. But the beginning chapters do analyze enough passages to gain an understanding of the centrality of helping the poor in Scripture, as well as what these passages say about who the poor are, the root causes of poverty, the best means by which to help the needy, and the responsibilities of the poor themselves.

Interestingly, too, several of the authors lay to rest misconceptions about what the Bible teaches; for example, that God requires the state to redistribute wealth—a wrong but nevertheless popular exegesis among progressives. To drive this point home, the editors include an entire chapter (by Lindsley himself) critically examining Jubilee and Acts 2-5 to debunk any notions that the Bible mandates socialism.

With this foundation the book then shifts gears to address how Christians ought to show compassion for the poor in an effective and moral way. This includes a deep discussion about how markets, enterprise, and free economies can lift people and nations out of poverty in ways charity—in the traditional sense of the word—and government handouts never could. To the skeptic, Scripture may seem at odds with markets, property rights, and voluntary contracting, but Dr. R. Mark Isaac reminds us in his chapter, Markets and Justice, that they are institutions of human society that “form a tapestry of good and evil” just like many others. Under the right circumstances, then, the pillars of the market process can “assist us in fulfilling the biblical mandates of “working the ground” and “helping the poor.””

The third section of the book provides the reader with examples of poverty alleviation in practice. This is most helpful for the Christian reader to see how even the best of intentions to alleviate poverty by giving long-term handouts can be ineffective and sometimes do more harm than good. Several of the authors encourage readers to look at the big picture, like “investment in entrepreneurship and policies that promote economic development,” which has a critical role to play in lifting people out of poverty. On a smaller scale, however, microfinance, mentoring, and business training can also help the poor get back on their own two feet.

Ultimately, alleviating poverty is a multifaceted approach, and the editors have made that clear through the diverse writings in this book. Of particular importance is that more emphasis needs to be placed on the role markets and trade can have in alleviating poverty on a widespread scale, especially considering more than 1 billion people throughout the world live in extreme poverty.

This book is an important starting point for Christians in all life stages who are serious about answering Jesus’ call to help the poor.

Tags: For the Least of These