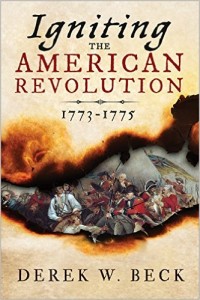 Americans tend to focus on 1776 as the beginning of our Revolution against the British. Historian Derek Beck argues otherwise — that the revolution began years earlier, in 1773. In Igniting The American Revolution 1773-1775, Beck uses new historical documents, detailed descriptions of scenes from the period, and more to paint a picture of colonies ready to break free.

The book opens with one of colonial America’s last — and most iconic — moments: the Boston Tea Party. This sets the stage for the rest of the book, by setting up Beck’s narrative style and proving that economic tensions were key in the buildup to the Declaration. This first chapter will also surprise readers expecting a more staid, academic style. Beck’s book is replete with footnotes, maps, and detailed breakdowns of the forces on each side, but it relies on taking the point-of-view of historical figures, describing snowy Boston streets and the halls of Parliament alike.

Beck also takes a surprisingly even tone, setting out to prove that neither side was entirely heroic or entirely evil. This is a refreshing change from traditional American historiography — the Founders here are statesmen, yes, but also human. History enthusiasts will definitely enjoy that this detailed book also takes an even keel towards the subjects and events it portrays.

The book ends with the Siege of Boston and the first battles of the nascent American Revolution, having brought to light the crucial events that set the stage for America’s separation from Britain. Both components are key — the Tea Party and other such Bostonian actions, and the realization by men such as Ben Franklin that Britain would not budge in terms of political representation. The British transition towards total war is also painted in detail, as British leaders like Lord North realized the necessity of deploying the British Army to North America itself.

Beck does an excellent job writing a history book, from his exhaustive details to the way he writes about these events. That being said, casual readers may struggle with the sheer level of detail Beck puts into describing the pre-Revolutionary tumult — this is not, for example, a Killing series book.

Nonetheless, for readers who are into history or who are willing to grapple with the minutiae of Revolutionary history, this is definitely a must-have. It shines a light on a less-remembered part of our collective history, and for that alone, Beck should be acclaimed.