Conservative Book Club » Bestsellers » In the Arena: Good Citizens, a Great Republic, and How One Speech Can Reinvigorate America

In the Arena: Good Citizens, a Great Republic, and How One Speech Can Reinvigorate America 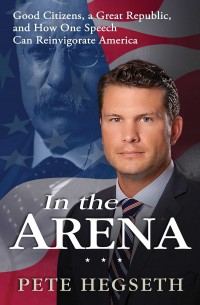 FOX News contributor Pete Hegseth’s first book, In the Arena, is a call to action based upon a famous speech given by President Theodore Roosevelt regarding the responsibilities of citizens in a republic.

Teddy Roosevelt’s speech, Citizenship in a Republic, was given at the Sorbonne, France in 1910, after his presidency.  The most famous passage of the speech is, “it is not the critic who counts; not the man who points out how the strong man stumbles, or where the doer of deeds could have done them better. The credit belongs to the man who is actually in the arena, whose face is marred by dust and sweat and blood.”

Mr. Hegseth does not agree with all of Teddy’s legacy.  He criticizes President Roosevelt for launching the birth pangs of today’s intrusive and never ending leftist progressive policies.  However, Hegseth also correctly points out that a smart, aggressive Teddy Roosevelt style foreign policy brings about great results for America and the peoples of the world.

Roosevelt’s tough foreign policy, known as “Speak Softly and Carry a Big Stick,” brought about positive change in America and the world.  He built the Panama Canal and ordered the voyage of the Great White Fleet while becoming the first President to win the Nobel Peace Prize due to his efforts in mediating the Russo-Japanese War.  This duality, which kept America at peace and increased her prestige, was later successfully emulated by Ronald Reagan’s “Peace Through Strength.”

However, it would be amiss to say that In the Arena is just a book about Teddy Roosevelt.  It is not. Rather it is the spirit of Teddy Roosevelt that is exalted in this text.  Quotations of Mr. Roosevelt’s speech are liberally used within In the Arena to illustrate points that are relevant to today’s issues and the call to action that is required to meet the challenges of the present time.

Mr. Hegseth writes clearly and concisely regarding the many challenges facing the United States and how President Obama has made those problems, at home and abroad, worse through his spoken agenda that pledged to “fundamentally transform the United States of America.”

Domestic policy notwithstanding, the greatest strengths of the book are in Hegseth’s discussions regarding foreign policy.  This should not be a surprise given Theodore Roosevelt’s strong interest in foreign affairs and Hegseth’s personal experiences as a soldier serving in the arena in Iraq, Afghanistan, and Guantanamo Bay, Cuba; experiences that lend credibility to the fact that the author is a man in the arena.  Mr. Hegseth’s experiences, from his military career to lobbying on Capitol Hill, are interwoven in the text in a thoughtful and clear manner.

The section on why France has declined, as a republic, is particularly compelling as Hegseth shows how lack of pride, low birth rates, and socialistic policies have contributed to a decline of French power and prestige.  Further, the French Revolution was a power grab that rejected long established institutions; institutions that could have served France well.  In America, our revolution was to reform the role of those institutions.  In the present day, the French population is utterly unhappy.  Few French are having children and if it was not for Islamic immigration, many of whom do not want to assimilate into French culture, France would actually have a negative birth rate. To that end, Hegseth clearly shows how foreign and domestic issues in a nation such as France provide a warning for the United States.

Teddy Roosevelt said America needs “a strong and virile people.”  Yet it is that manliness that is being emasculated in today’s America with ability of youth to enjoy near total freedom but without, as Hegseth writes, developing “little constructive ability to fight for them.”  Writing of, amongst other examples, fifth place trophies and the trend for some to decry football because of its “violence” leads  Hegseth to conclude “The wussification of America is in full effect.”  The need to fight for those freedoms is important to Hegseth in order to stand up to bullies; whether it be in the schoolyard, in the domestic political arena, or confronting evils abroad.

The American government and civic institutions need to encourage people to not be, as Roosevelt said, “far more conscious of its rights than of its duties.”  Man is not perfectible but there is good and evil and America is a force for good as Hegseth writes.  Woe to those who compare the nearly isolated instance of Abu Ghraib against all the good America does.  Apology tours have not made America a safer place and class warfare, under this administration, have not brought us together.

Perhaps most telling, as Hegseth points out, is that this should not be a surprise considering Obama felt, in the immediate aftermath of September 11, 2001, that the hijackers were motivated by a “climate of poverty, ignorance, hopelessness, and despair.”  As President, Obama has overseen a politically correct war where Islamic terrorism is not uttered, red line ultimatums were a sham, the Global War on Terrorism has its name changed and bad deals are made with Iran.

The solutions section of In the Arena is very small in comparison to the rest of the book.  However, the enlightened reader, who grasps the Roosevelt/Hegseth idea of civic involvement, will already be thinking of their own solutions during the reading. As Hegseth wrote, In the Arena is not a political manifesto but a call for citizen leaders to rise up and change bad policies through their own thinking and actions.

In the Arena serves as a warning but also a call to action.  Bound with historical examples, both positive and negative, and tying those examples into the issue we face today, Pete Hegseth has written an important read, and given a great challenge, for all Americans.

Tags: In The Arena, Pete Hegseth