Jerusalem: A Biblical and Historical Case for the Jewish Capital 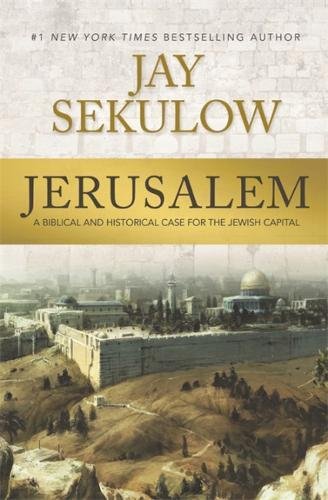 In his new book, New York Times bestselling author Jay Sekulow presents a political and historical rationale for the existence of Israel as a sovereign nation.

The State of Israel and its very right to exist is not only a linchpin issue not only in the Middle-East, but also a critical issue to the world at large. Whether it is the blatant and stated desire of ISIS, Hamas, Hezbollah, or Iran to wipe Israel from the face of the earth, or the more subtle but equally insidious aim to delegitimize Israel’s existence through efforts at UNESCO, the goal is the same–get rid of Israel.

This book defends Israel’s right to exist as a sovereign nation. As Chief Counsel for the American Center for Law and Justice, Jay Sekulow fought with Israel hand-in-hand in some of Israel’s most strategic, international battles. Now, he pulls together the definitive and comprehensive look at Israel-one of the world’s most controversial nations- and its importance to us as Americans and as a key focal point to the future of the world.

He looks at the legal case for its prominence, as well as the historical and political rationale for its existence as a sovereign nation and homeland for Jews today, and encourages readers to stand with him against the hatred, lies, and efforts to delegitimize one of the world’s oldest nations.

Tags: Jay Sekulow, Jerusalem: A Biblical and Historical Case for the Jewish Capital