Our Lost Constitution: The Willful Subversion of America’s Founding Document 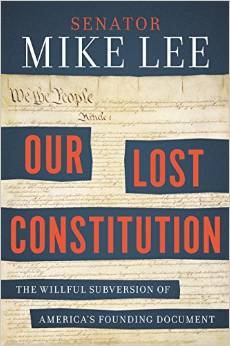 According to a recent national educational assessment, a plurality of seventh graders believe that the government is constitutionally obligated to provide citizens with a job.

Alarming, yes. But before we indict our educational system for civic instruction malpractice, it’s worth remembering that ignorance of our country’s Constitution is found at the highest levels.

In fact, it was during the height of Obamacare negotiations that Speaker Nancy Pelosi, and third in line in the presidential succession, famously scoffed at a reporter questioning the constitutional basis of having the federal government run a health care system. No really, pressed the reporter, where’s healthcare mentioned in the U.S. Constitution. Speaker Pelosi could only muster up the weak retort, “Are you serious!?”

Whether or not Speaker Pelosi knew the constitutional basis for Obamacare was tenuous or a constitutional scholar short on time, what matters is just how much of a nuisance the U.S. Constitution has become to some.

But then again, was there ever a time when knowing the U.S. Constitution was fashionable?

And while there’s no shortage of books on the U.S. Constitution, few are taking the time to meticulously point out the origins, evolution and eventual mutilation of the U.S. Constitution, including the butchering of the separation of powers doctrine that has opened the door to today’s Environmental Protection Agency’s job-killing regulations to President’s Obama’s unconstitutional immigration executive orders, just to name a few.

As we learn from Senator Lee’s book, the U.S. Constitution’s elasticity has been under constant stress from both the legislative and executive branches from its earliest days. From Lincoln’s suspension of habeas corpus in the 19th century to Roosevelt’s packing of the Supreme Court in the 20th century, today’s constitutional attacks may pale in comparison to some.

And yet, Senator Lee’s book avoids reading like a predictable diatribe against liberals and President Obama, with the Utah statesman serving up plenty of criticism for the Republican Party, including the last Republican to sit in the Oval Office.

“But in a shocking abrogation of his constitutional duty to defend the Constitution, Bush signed the bill (McCain-Feingold), meekly explaining, “I expect the courts will resolve these legitimate legal questions as appropriate under the law.”

Passing the buck. This is a constant theme in Our Lost Constitution. Whether it’s the Legislative body’s penchant for outsourcing its lawmaking responsibility to the Executive branch, or as in the case of McCain Feingold, the Executive too busy to deal with the constitutionality of free speech, Senator Lee’s book is a sobering reminder of just how bloated our federal government has gotten.

On this, the Senator is quite prescriptive: “Here’s why the REINS Act is necessary: Congress needs to be stripped of one of its favorite tricks – delegating broad lawmaking power to executive-branch agencies and then disclaiming any responsibility for the laws resulting from that delegation.”

But in other instances, the reader wishes he could have spent more pages talking about the practical and ever-evolving questions on how to secure our privacy from illegal searches and seizures by the federal government while protecting our homeland from radical Islamic and domestic terrorism. Senator Lee’s insight will be particularly helpful given his background as a constitutional lawyer and his family’s impressive legal pedigree as the Republican Party tries to figure out this Rubik’s cube of privacy and security.

It’s hard not to become depressed when reading Our Lost Constitution, especially when we consider just how much we’ve strayed from our Founding Father’s vision of a republican democracy. Our Lost Constitution takes us back to the long hot summer days in Philadelphia where the aging elder statesman Benjamin Franklin used his intellect and charm to stitch together support for the origination clause that may have single-handedly salvaged the Constitutional Convention.

The irony is not missed in Senator Lee’s telling of how Alexander Hamilton’ call for an elected monarch at the convention was universally dismissed, but how the Hamiltonian vision is a much more accurate reflection of today’s Office of the Presidency.

Of course besides the Legislative Branch’s proclivity in delegating more of its lawmaking responsibilities to the Executive Branch, constitutional conservatives also have to contend with the Judicial Branch’s ever-expanding definition of constitutionally protected rights. Lee does not mince words when referring to Bush-appointed Chief Justice John Roberts’s decision to validate Obamacare’s individual mandate.

In a section titled, “Another Roberts, Another Surrender,” Lee writes: “According to Chief Justice John Roberts, the penalty for not buying insurance is just another tax. All it took was a little sleight of hand. Roberts needed only to delete Obamacare’s command that Americans shall buy insurance; replace the command with a mere encouragement to buy insurance; and call the mandate’s ‘penalty’ for not buying insurance a ‘tax.”

Discouraging, yes. But if you are as optimistic as Senator Lee is in the power of persuasion, then his concluding chapter reads like a helpful tract to evangelize your family and friends to demand a government that is more responsive to the will of the people and the constitutional constraints placed on it.

In a year where scores of Republican aspirants for the nomination plead their case to primary voters, Our Lost Constitution is a must read for the discerning voter not impressed with big government policies – even if they are intended for Republican constituencies – but more interested in returning to a government closer to what the Founder’s envisioned.

Is it too late? Perhaps, but for the pessimists the Senator urges patience and persistence, and at the very least hopeful that this book will be the beginning of a conversation about the true meaning of the Constitution. – An ambitious, but not unrealistic dream.

Original CBC book review written by Israel Ortega, Vice President of Media Relations and Multicultural Affairs at CRISP Communications, LLC, and was the Chief Spokesperson for Spanish Language Media at The Heritage Foundation.