No Campus for White Men: The Transformation of Higher Education into Hateful Indoctrination 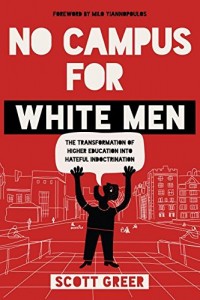 No Campus for White Men shines a bright light on the growing obsession with diversity, victimization and identity politics on today’s college campuses, and shows how it is creating an intensely hostile and fearful atmosphere that can only lead, ultimately, to ever greater polarization in American society.

Across the country, ugly campus protests over speakers with dissenting viewpoints, as well as a preoccupation with micro-aggressions, “trigger warnings,” “safe spaces,” and brand-new “gender identities,” make it obvious that something has gone terribly wrong with higher education. For years, colleges have pursued policies favoring students based not on their merit, but on their race, gender, and sexual orientation. The disturbingly negative effects of this culture are now impossible to deny.

Scott Greer s investigative work links such seemingly unrelated trends as “rape culture” hysteria and Black Lives Matter to an overall campus mindset intent on elevating and celebrating leftist-designated “protected classes” above everyone else while intimidating, censoring, and punishing those who disagree with this perversely un-American agenda.

In No Campus for White Men, Greer broadens the usual media focus well beyond coverage of demonstrations by easily offended college students, to spotlight the darker forces at work behind the scenes that are feeding higher education s metastasizing crisis and how all this results in sustained animosity, first and foremost, toward white men. Greer also documents how this starkly totalitarian culture is not isolated to higher education, but is rather a result of trends already operating in society. Thus, he shows, today’s campus madness may eventually dominate much more of America if it is not addressed and reversed soon.