The Politically Incorrect Guide™ to the South 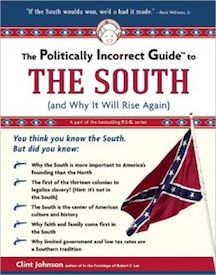 If there’s anything the liberal media loves to hate, it’s the South. And thanks largely to them,today almost every reminder of Southern history and heritage is under attack: battle flags,soldier statues,even songs such as “Dixie.” Now, in “The Politically Incorrect Guide™ to the South,” Clint Johnson fights back against this media-led “hate the South” campaign. He reveals that,far from being the backwater of prejudice and hate that liberals would have you believe, the South has always been the center of American culture. Indeed, Johnson shows, from the Founding Fathers(Washington, Jefferson, Madison, Monroe, and many others) to the frontiersmen who tamed the West to the Country Music, NASCAR, Bible-thumping heart of “Red State” America, the South is the quintessence of what’s original, unique, and most-loved about American culture. And with its emphasis on traditional values, family, faith, military service, good manners, small government, and independent-minded people, the South is just plain more livable than the North – which is one reason why millions of Yankees, white and black, have been moving down there in droves.

“This won’t be a selective history,” writes Johnson, a native Southerner and author of countless books and articles on Southern history and culture. “No defenses will be offered for slavery, segregation, or racial discrimination — but it will give the other side of the story too. … The South is all about memory, heritage, and pride of place. I refuse to go along with the expunging of that memory, heritage, and pride, and I hope the readers of this book, Northern and Southern, will rise up and join me in protesting those who are trying to do it.”

Think you know the South and Southern history?

“The Politically Incorrect Guide™ to the South” gives you the facts behind scores of revelations like these:

Tags: Clint Johnson, The Politically Incorrect Guide to the South