Restoring the Lost Constitution: The Presumption of Liberty 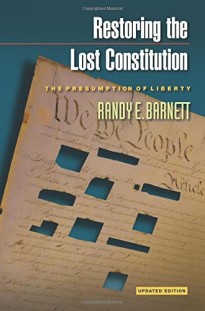 The U.S. Constitution found in school textbooks and under glass in Washington is not the one enforced today by the Supreme Court. In Restoring the Lost Constitution, Randy Barnett argues that since the nation’s founding, but especially since the 1930s, the courts have been cutting holes in the original Constitution and its amendments to eliminate the parts that protect liberty from the power of government. From the Commerce Clause, to the Necessary and Proper Clause, to the Ninth and Tenth Amendments, to the Privileges or Immunities Clause of the Fourteenth Amendment, the Supreme Court has rendered each of these provisions toothless. In the process, the written Constitution has been lost.

Barnett establishes the original meaning of these lost clauses and offers a practical way to restore them to their central role in constraining government: adopting a “presumption of liberty” to give the benefit of the doubt to citizens when laws restrict their rightful exercises of liberty. He also provides a new, realistic and philosophically rigorous theory of constitutional legitimacy that justifies both interpreting the Constitution according to its original meaning and, where that meaning is vague or open-ended, construing it so as to better protect the rights retained by the people.

As clearly argued as it is insightful and provocative, Restoring the Lost Constitution forcefully disputes the conventional wisdom, posing a powerful challenge to which others must now respond.

This updated edition features an afterword with further reflections on individual popular sovereignty, originalist interpretation, judicial engagement, and the gravitational force that original meaning has exerted on the Supreme Court in several recent cases.