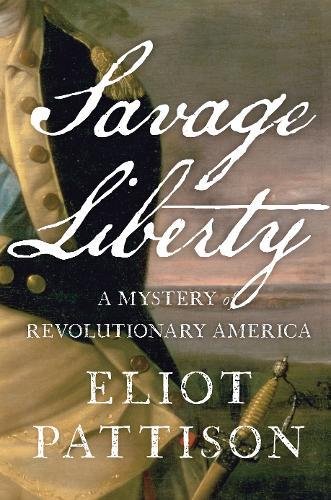 The fifth entry in Eliot Pattison’s Bone Rattler series, Savage Liberty follows the exiled Scotsman Duncan McCallum along a tortuous path that will lead him to the American Revolution.

When a ship arriving from London explodes in Boston Harbor, both the peace of the colonial city and Duncan McCallum’s life are shattered. Summoned by his new friend John Hancock to a beach awash with the bodies of the victims, Duncan discovers that the ship was deliberately sabotaged, apparently to cover the theft by French agents provocateurs of a secret document being carried to the Sons of Liberty. Hancock refuses to let him take his evidence to the authorities, for this is 1768 and relations with the government are so sour that officials are being hanged in effigy.

Fearing that the intrigues of Hancock and the Sons might set the colonies ablaze, Duncan relentlessly pursues the truth, only to be falsely charged with treason and murder. To escape the hangman’s noose and restore his honor, Duncan has no choice but to follow a northbound trail of violence and deception while being relentlessly hounded by bountymen and vengeful soldiers. With the help of unexpected new friends, including Ethan Allen, aged natives, and outlawed Jesuits, he survives scalp hunters, imprisonment, and his own spiritual crisis, only to realize he cannot resolve the terrible crimes until he first understands the emerging truths about freedom in the American colonies.

Discover for yourself in Savage Liberty: A Mystery of Revolutionary America!