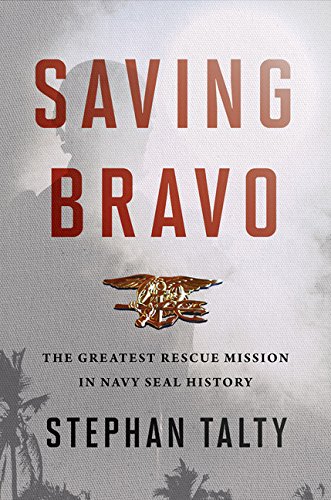 The Vietnam War doesn’t occupy the same place in the American imagination as World War Two. History aficionados still speak with reverent tones about the Battle of the Bulge or Audie Murphy single-handedly holding off a company of Germans at the Colmar Pocket. Much fewer do about the Battle of Ia Drang in 1965.

That hasn’t stopped a new wave of authors from telling stories about unsung heroes in this morally confused war. A new book by Stephan Talty does just that. In Saving Bravo, Talty gives us a taut study of the largest military search-and-rescue operation in history, taking us into the darkest jungles of Vietnam. It depended on the will of an American aviator to evade the enemy and a Navy SEAL and a South Vietnamese commando to travel miles incognito through river and jungle to save him. If he had been captured, his classified intelligence about American avionics would have leaked to the Soviet Union and altered world history.

All this took place in 1972, when the Vietnam War was a lost cause. Public support in the US had cratered; the soldiers and airmen who returned home were called “mercenaries” and their cars were keyed on Air Force bases. Nixon was searching for a way to leave the battlefield, but thousands of Americans were still fighting for their lives, grasping for some meaning to their service.

At the time, few American airmen were more valuable than Lt. Colonel Gene Hambleton. He carried secrets about cutting-edge missile technology that didn’t just concern Vietnam but could have advanced Soviet weapons technology by years if it fell into their hands. When Hambleton was shot down behind enemy lines amid North Vietnam’s Easter Offensive, he was left to lie and wait to be rescued in the middle of one of the fiercest ground battles since World War Two.

With time running out on the hallucinating and half-starved American, his fellow airmen would have to find a way to extract him from a flood of 30,000 North Vietnamese soldiers. It was a rescue mission that, for a moment, put a halt to the US’s fight in the Vietnam War.

Saving Bravo is an incredibly told war story, and Talty puts us right in the middle of the action (as he has done in his many other books, such as A Captain’s Duty, which was the basis for the Oscar-winning film Captain Philips). Meticulously researched, Talty weaves military and geopolitical strategy issues into a gripping narrative centered around the 12 fateful days in the life of Hambleton and shows us the enormous sacrifices that went into the mission.

Vietnam was for many a war without heroes. But the eleven men who went after Hambleton gave their lives for a higher cause. Drawing from access to unpublished papers and interviews with the families of those lost in the mission—many of whom are still waiting for the remains of their loved ones, and answers they feel the government owes them—Talty reveals a remarkable story of bravery, compassion, and humanity, one that will speak to all struggling to make sense of an anxious and uncertain time.