Conservative Book Club » Biographies & Memoirs » Shakedown: How Our Government Is Undermining Democracy in the Name of Human Rights

Shakedown: How Our Government Is Undermining Democracy in the Name of Human Rights 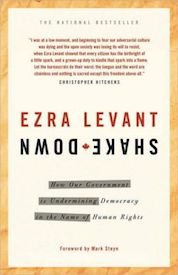 “On January 11, 2008, I was summoned to a 90-minute government interrogation,” writes Ezra Levant. “My crime? As the publisher of Western Standard magazine, I had reprinted the Danish cartoons of Mohammed to illustrate a news story. I was charged with the offence of ‘discrimination,’ and made to appear before Alberta’s ‘human rights commission’ for questioning. As crazy as it sounds, I became the only person in the world to face legal sanction for printing those cartoons.”

As a result of this highly publicized event, Ezra Levant began investigating other instances in which innocent people have had their freedoms compromised by bureaucrats presuming to protect Canadians’ human rights. Now, in “Shakedown: How Our Government Is Undermining Democracy in the Name of Human Rights,” Levant reveals his findings — showing how, every day, more and more Canadians are trapped in these Alice in Wonderland proceedings, where bizarre new human rights are made up on the spot — and where regular legal procedures don’t apply.

Shocking, sobering and scrupulously documented, Shakedown is a powerful plea to Canadians to reclaim their basic liberties — and an urgent warning to America about how vulnerable our First Amendment rights are to political manipulation.

Tags: Ezra Levant, Shakedown: How Our Government Is Undermining Democracy