Conservative Book Club » Bestsellers » The Silencing: How the Left is Killing Free Speech

The Silencing: How the Left is Killing Free Speech 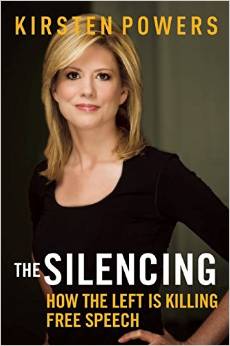 Not too many years ago, my wife and I attended a special theme dinner at a famous Ann Arbor restaurant.  We were seated with a delightful couple who both worked at the University of Michigan.  Since Valerie and I moved to Ann Arbor so I could attend the U of M School of Music, we had a lot to talk about.

As the evening went on, it became clear that the couple assumed that Valerie and I were as liberal as they were.  Valerie could see I was about ready to say something about my conservative views, and she gave me a “don’t do it” kick under the table.  I went ahead anyway.  In as nice a way as possible, I let them know that I was a conservative and they seemed to think I was joking.  When I made clear it was no joke, the wife shrank back and said, “You can’t be conservative.  You are too nice a person for that.”  I assured her that there are lots of nice Conservatives just as there are lots of nice Liberals.

It’s just that when we live our lives inside self-made bubbles, we don’t meet “the other.”  We end up believing the cartoon version of people who think and believe differently than we do.  People who manipulate us for a living know what confirms their already held views, read what reinforces what we have already read and accept, and how we choose movies, music, and TV shows based on what we already like.  We make ourselves easy targets for those who want to exploit these bad and lazy habits of mind and spirit.  This isn’t healthy for us or is good for our society.

If you watch Fox News, as I do, you know Kirsten Powers.  I have always appreciated her because she is one of those on the Left who come by her views out of sincerity and principle rather than merely carrying water as a paid operative or repeating talking points.  She knows what she thinks and why she thinks it.  I appreciate that a great deal, because it is possible to engage in conversations and exchange ideas with a person who is willing to speak frankly about their personal beliefs rather than being an advocate for an employer or a party position.  Not that agreement must be the end result of such a conversation, but that each participant gains a richer understanding of the issues involved, why people view the world as they do, and each becomes clearer about presenting his or her own views in ways that the other side can actually hear.

Kirsten Powers does so well as a liberal on Fox News because she grew up as the daughter of liberal academics in Conservative Alaska.  She is used to sharing her views with conservatives as I am in sharing my conservative views to liberals here in Ann Arbor.  She went on to live in the liberal Democrat bubble in Washington D. C. and New York before her world changed when she became a Christian.  She’s still very liberal and while we would agree on many core philosophical principles and goals, we would still disagree on how those principles should be implemented in reality.  And that’s fine.  Sincere disagreement is legitimate; deception and hostility are not.

This book is really for conservatives, liberals, progressives, and moderates.  Conservatives will appreciate Powers calling out what she calls “illiberals” for their double standards and examples of bias and hypocrisy.  But conservatives would do well to look for the same tendencies in themselves and their own politics.  More importantly, we need to become more aware of the importance of the battles we have lost and what they mean for the future of America.

The author points out that only about a quarter of Americans over 45 think there is a problem with too much free speech in America.  Most of us think that “free speech zones” at universities are absurd and should be banned.  To conservatives, all of America should be a free speech zone.  But because we have lost the universities (and the public schools) to liberals, we tend to ignore it as if it didn’t matter.  But here’s why it does.  More than 45% of adults between 18 and 45 think that the problem with free speech in America is that there is too much of it and should be limited to promote other (liberal) societal goals and “rights.”

Powers takes us on a tour of the absurdities taking place at our universities and their desire to shut down debate except for espousing the “approved” side.  Nowadays, being easily offended has become a weapon of the Left in ridding their campus of professors, students, and administrators who dare espouse anything other than the currently approved progressive line.  This is important because these mere students today will become the progressive judges, lawyers, teachers, and executives of tomorrow.  It matters that they are trying to delegitimize Fox News, and that the White House calls their own approved media and pool reports “transparency”.

Powers is right to ask us to expand our social horizons to include people as friends we would not normally seek out.

Original CBC book review written by Craig Matteson, who is a subject matter expert in business and entrepreneurship. He is the CTO/co-founder of HRgems, Inc whose TraitSet® service is used nationwide.  He has earned two degrees from the University of Michigan, BM in Music Theory and an MBA in Finance.