The Civility Code (The Civilogy) 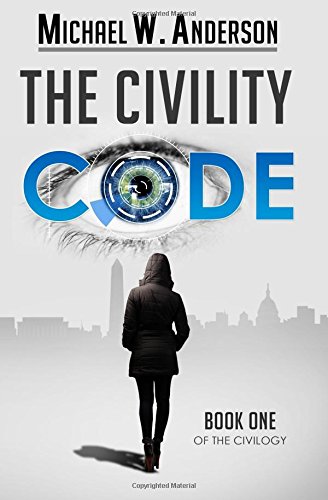 Recently, Nerdist published an article lauding V for Vendetta as the “perfect story for our current political climate,” urging readers to pick up the graphic novel or watch the highly vetted film of dystopian world in which citizens are constantly under the surveillance of an aggressive, all-powerful government.

But if you take the time to read fiction this summer, there is a much more valid, timely and relevant read on the market. A fascinating new novel by author Michael Anderson portrays an America of the future, in which the government has utilized smart technology to drive a vehicle of mass control; it is a chilling view of a world following the trajectory of current cultural and political trends and it will certainly hit closer to home than V’s portrayal of 1980s England.

In the first of Anderson’s Civology trilogy, The Civility Code, the fear of offense and claims of victimization are mounting and the federal government has become a radically regulating mechanism of control.

The loss of liberty can infiltrate gradually, quietly, without protest, restricting individual rights and forming new, minority-driven norms through legislation and litigation; and in The Code, those controlling the law have nearly succeeded in eliminating its existence.

It is 2049 and the number of Prohibited Words has grown to 14,014. Offensive language has become a criminal offense and the prosecutors are out to silence all dissent.

As the Civility Code Commissioner Collis Lafferty muses, “…there was nothing innocent about words. They had meaning. And certain words, alone or in combination, were dangerous.”

Like Wells, Orwell or Huxley, Anderson’s novel is eerily prophetic; the book outlines a not-too-distant future in which microaggressions and an increasingly hyper-sensitive populace have contributed to a growing prohibited words list, politicians are made through monetary exchanges and Big Brother is doing more than watching- he is seeing us through our own eyes.

Like V, mass government surveillance is a central theme in Anderson’s novel, but Anderson has created a ‘smart’ update to the elimination of private space.

Smart lens systems, coined IRIS 1.0 and IRIS 2.0 by Anderson, are the main vehicle for Big Brother’s successful intrusion into the private lives of citizens.

Sony’s patent on smart contact lenses has just recently become big news, but Anderson has been writing about them for years.

“I started writing The Civility Code in 2013 which was prior to the announcements of the various smart lens patents,” Anderson said. “However, it wasn’t difficult to envision the functionality of a smartphone eventually moving to a contact lens like the Inserted Retina Information System (IRIS 1.0) or a bio-integrated lens like the Integrated Retina Information System (IRIS 2.0).”

A group of highly skilled hackers fighting the Civility Commission are generating pushback, but their security, based on their online anonymity, is constantly under attack.

While individual hacktivists need little more than access to basic technology and modest computer savvy to hack an online account and mine for personal data, they are easier to combat than institutionalized surveillance, especially when it is performed or sanctioned by the government, Anderson said.

“IRIS is a critique of invasive technology, our willingness to sacrifice our privacy in the name of convenience, and our lack of concern for the U.S. government’s and corporations’ increasing willingness to employ cyber surveillance, both publicly and privately,” Anderson said.

As a social critique, The Civility Code extends beyond the government’s invasion of individual privacy.

Federal infringement into the private sector results in characters’ loss of jobs when they will not comply with IRIS 2.0 implantation; individual liberties are disappearing and the free-market is fast on its heels.

Anderson’s dystopia is a bleak and suffocating space. Suicide rates have skyrocketed following the reduction of freedoms and a majority of citizens are deemed ‘disabled’ and increasingly medicated to avoid emotional disturbances.

“A society that rewards anger, outlaws offense, and ensures that no one experiences disappointment will have to deal with the consequences- people who are incapable of handling negative emotions,” Anderson said. “Given that humans are endowed with a wide range of emotional makeups, it is not possible to create an environment which fully protects everyone from negative emotional triggers. Medication is one way to deal with these emotions.”

In the book’s uber litigious society, personal offenses are increasingly validated as injurious in the justice system.

“The justice system tends to follow cultural shifts,” Anderson said. “As our culture becomes more offense-intolerant, it is a natural progression from mere intolerance to codified illegality. This shift is already apparent on college campuses where certain language and ideas, often held by a majority of Americans, is nonetheless deemed offensive by an empowered few and violations of campus civility codes. Students are punished all the time for these ‘offense’ crimes.”

Anderson finds his campus culture outlet in Kata, a young Georgetown university student who is regulated beyond her ability to write accurate articles for the university’s news outlet.

“We were told that living in a ‘civil society’ would free us to be ourselves. Talk about a bait and switch,” says Kata’s mother, a former journalist, now living with chronic illness.

In the book’s social world, manipulation of gender to reflect preference over biology is another strong and highly relevant theme. Gender-neutral or “gender inclusive” pronouns have evolved in the extreme; a cultural necessity backed by law.

Characters are harshly chastised for utilizing “he” and “she” in favor of the new standard “ze.” A main character is left with a pile of discarded pink and blue toy bags when the parents attending his child’s party refuse to accept gender-specific colors for their child’s party favors, expressing outrage at the gender construction “forced” upon their young children.

“There is a small, but vocal, minority that finds traditional concepts of gender extremely offensive, and is working very aggressively to separate gender from biological sex,” Anderson said. “Many institutions, particularly universities and entities like Planned Parenthood, have already started to use non-binary pronouns in official documentation in order not to be offensive. We can expect anyone who uses non-binary pronouns to be labeled sexist in the near future, and as long as people are averse to being called names, I imagine the English language will move to a non-binary pronoun system sooner rather than later.”

A corporate attorney at a DC law firm, Anderson lays out a strong foundation for the development of the law, breaking the chapters into articles and sections that shaped the evolution of The Civility Code; and they are not only plausible in fiction.

“For the majority of our country’s history, the underlying cultural and moral foundation was consistent with the principles of the Constitution as it was originally drafted,” Anderson said. “A Constitution that simply mirrors the cultural movements of society offers little protection of the freedoms Americans have traditionally valued.”