The False Promise of Big Government: How Washington Helps the Rich and Hurts the Poor 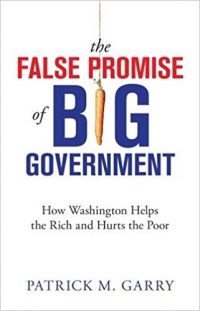 The debate over the size and scope of the federal government has raged from the New Deal right up through the 2016 presidential race. So why have opponents of big government so rarely made political headway? Because they fail to address the fundamental issue.

Patrick M. Garry changes that in this short, powerful book. Garry, a law professor and political commentator, reveals six ways in which big government hurts the very people its purports to help: the poor, the working class, and the middle class.
And the problem is worse than that, he shows: big government actually props up the rich, the powerful, and the politically connected.

The False Promise of Big Government thus debunks the myth at the core of modern progressivism: that only government can help the average person survive and prosper in the contemporary world. Garry provides conservatives and libertarians with the intellectual ammunition they have lacked. He demonstrates that opponents of big government rely on arguments that are true but fail to address the heart of the issue. Yes, massive government programs are wasteful and impose huge economic costs on America, and yes, many of them are unconstitutional. But in focusing on economic and constitutional arguments, proponents of limited government cede the moral high ground to progressives. The truth is that those who claim to speak for the “little guy” actually push for policies that harm the most vulnerable in society. And it is just as true that proponents of limited government don’t ignore the working and middle classes but in fact are trying to free those individuals from a government that acts against their interests.

In just one hundred pages, The False Promise of Big Government lays out everything you need to know about why big government fails and how to overcome it at last.