Turning Point: Reclaiming an America We Can Believe In 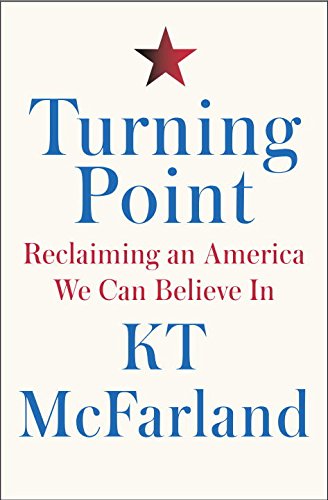 Drawing on stories and lessons from her impressive foreign policy career, FOX News contributor and White House veteran KT McFarland outlines in Turning Point why it’s time to recapture American exceptionalism and reassert our position as a global leader.

President Obama will leave office with the majority Americans believing we’re a nation in decline, that our economy will never recover, that we’re being pushed around all over the world, and that we’ve lost our sense of national purpose. The President’s weak and schizophrenic foreign policies are to blame for this malaise, but the good news delivered in Turning Point is that this state does not have to permanent. Based on her experience under three presidents, particularly as a key player in Reagan’s Cold War triumph, KT McFarland knows that with the right leadership and a major policy course correction, America can choose to dominate the world stage once again. Every 40 years since America’s founding, our country’s leaders have lost their way. But where other countries would succumb to an inevitable decline, America has always come roaring back, sweeping away the Establishment of the day and reconnecting with our core values. Most recently, we did it in 1980 with the Reagan Revolution–with KT’s help–setting off one of the longest periods of peace and prosperity in American history.

Drawing on her years working with Kissinger, Nixon, and Reagan, and discussing Russia, Iran, and ISIS, among many other current foreign policy issues, KT offers a prescription for how to turn America around–by fixing the economy, cutting taxes, and unleashing American innovators and entrepreneurs; reestablishing America’s global leadership; and remembering not just that we are an exceptional nation, but recounting why.