Unbelievable: 7 Myths About the History and Future of Science and Religion 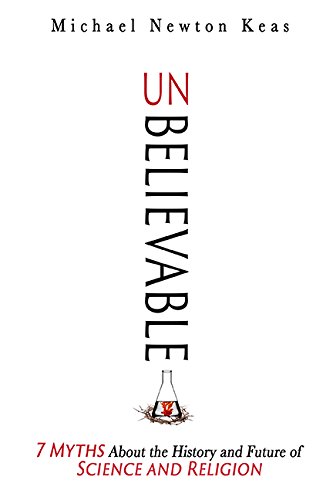 Scientists love to tell stories about the quest to understand the universe—stories that often have profound implications for belief or disbelief in God. These accounts make their way into science textbooks and popular culture.

But more often than not, the stories are nothing but myths.

Unbelievable explodes seven of the most popular and pernicious myths about science and religion.Michael Newton Keas, a historian of science, lays out the facts to show how far the conventional wisdom departs from reality. He also shows how these myths have proliferated over the past four centuries and exert so much influence today.

• Why the vastness of the universe does not deal a blow to religious belief in human significance
• Why the “Dark Ages” never happened
• Why “Flat Earthers” had basically disappeared by the third century B.C.
• Why the real story of Giordano Bruno’s life and death is far more complicated than the popular account of him as a martyr for science
• What everyone gets wrong about Galileo, and why it matters today
• Why the notion that Copernicus “demoted” humans from the center of the universe didn’t gain traction until centuries after his death
• The futuristic myth that scientists and others are positioning to challenge religion

In debunking these myths, Keas shows that the real history is far more interesting than the common account of religion at war with science. This accessible and entertaining book lays out powerful arguments that will be embraced by religious believers tired of being portrayed as anti-intellectual and anti-science.