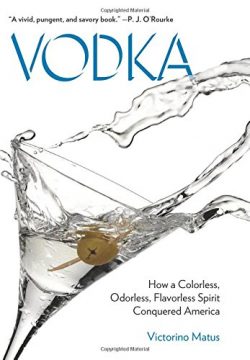 It began as poisonous rotgut in Medieval Russia—Ivan the Terrible liked it, Peter the Great loved it—but this grain alcohol “without distinctive character, aroma, taste, or color” has become our uncontested king of spirits.

Vic Matus takes us on an incredible visual journey from vodka’s humble American origins in a Depression-era Connecticut factory—using the family recipe from a poor Russian exile in France named Vladimir Smirnov—through its rise to glamour and fame at the hands of James Bond and the 1990s boom enshrined in Sex and the City’s Grey Goose Cosmos to today’s craft distillery movement, which approaches the drink as an art form.

You’ll see in clear, intoxicating detail how hippie culture, women’s lib, and an absolutely ingenious Swedish company all played their part, transforming the booze into a status symbol. By 1975, the war had ended: Vodka officially became our favorite spirit.

Today, a third of all cocktails ordered contain it. Last year $20 billion in sales poured in from more than 140 million gallons of the stuff. Here is the crisply distilled, bracing story of how risk-taking entrepreneurs defied the odds and turned medieval medicine into a multibillion-dollar industry.