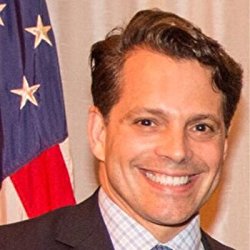 Anthony Scaramucci is the co-managing partner and founder of SkyBridge Capital, a global investment firm with around $12.4 billion in assets under management and advisement as of August 31, 2016. The firm also produces the annual SkyBridge Alternatives (“SALT”) Conference, a premier global investment and thought leadership forum.

Mr. Scaramucci is co-host of “Wall Street Week,” the iconic financial television show that was revived in 2015, as well as a contributor to the Fox Business Network and Fox News Channel. He is the author of three books: Hopping Over the Rabbit Hole, The Little Book of Hedge Funds, Goodbye Gordon Gekko.

Prior to founding SkyBridge in 2005, Mr. Scaramucci co-founded investment partnership Oscar Capital Management, which was sold to Neuberger Berman in 2001. Earlier, Mr. Scaramucci was a vice president in Private Wealth Management at Goldman Sachs.

In 2015, Mr. Scaramucci was ranked #91 in Worth Magazine’s Power 100: The 100 Most Powerful People in Global Finance. In 2011, he received Ernst & Young’s Entrepreneur Of The Year® – New York Award in the Financial Services category.

Mr. Scaramucci is a member of the Council on Foreign Relations (CFR), vice chair of the Kennedy Center Corporate Fund Board, a board member of The Brain Tumor Foundation and Business Executives for National Security (BENS), and a Trustee of the United States Olympic & Paralympic Foundation. He is a former member of the New York City Financial Services Advisory Committee (2007-2012). Mr. Scaramucci is also an active bundler within the Republican Party, having served on the national campaign finance committees for Mitt Romney and Donald Trump.

Mr. Scaramucci, a native of Long Island, New York, holds a B.A. in Economics from Tufts University and a J.D. from Harvard Law School.