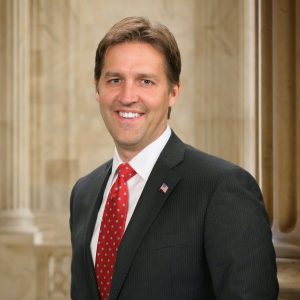 Ben Sasse is a United States Senator, representing the great state of Nebraska.

He was elected in a 2014 landslide, winning each of Nebraska’s 93 counties, and securing the second-largest margin for a new senator in the history of the state. Living off of a rickety old campaign bus, he and his family campaigned tirelessly on a common-sense platform of restoring the Constitution to its rightful place and encouraging a more constructive politics where every public official works to make the American Dream achievable for every family. He believes in term limits and a humbler Washington, where the federal government does fewer things, but the more important things, more urgently, more transparently, and with less partisan screaming. Healthy lives are lived primarily in the private sector, and the vast majority of good policy is created at the state and local level — and Washington should get better at talking honestly about these essential American realities.

A fifth-generation Nebraskan, Ben grew up walking beans and detasseling corn, experiences that taught him the value of hard work. A graduate of Fremont High School, he was recruited to wrestle at Harvard and then earned a PhD in American history at Yale. Ben comes to the Senate having spent the last five years as a college president. When he was recruited to take over the failing Midland University, Ben was just 37 years old, making him one of the youngest college presidents in the nation. The 130-year-old Lutheran college was on the verge of bankruptcy when he arrived, but became one of the fastest-growing higher education institutions in the country by the time of his departure.

Most of his career has been spent guiding companies and institutions through times of crisis with straight talk about the core issues. He has worked with the Boston Consulting Group and McKinsey and Company, as well as private equity firms and not-for-profit organizations, to tackle failing strategies across a broad array of sectors and nations.

Ben believes that we have a moral obligation to pass along a country as great and free and opportunity-filled to the next generation as we were blessed to inherit from our grandparents. This will require a more serious Congress, committed to reforming entitlements, telling the truth about fake federal budgets, modernizing national security for the age of global terror networks, and helping the next generation recover a sense of optimism about the American Dream for everyone of every race in every neighborhood.