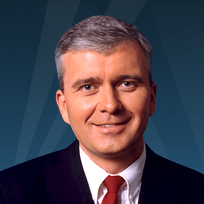 Bill Sammon was born and raised in Cleveland, where he worked as a reporter and editor for The Plain Dealer, specializing in voter fraud. In 1995 he moved to Europe to cover the Bosnian civil war for The Stars and Stripes; his first assignment was to chronicle the fall of Srebrenica, the worst European massacre since World War II. Bill also traveled extensively throughout the Middle East, specializing in coverage of Kurdish fighting in Turkey and Iraq.

In 1997 he moved back to the United States to work for The Washington Times, where he currently serves as Senior White House Correspondent. He covered the Clinton-Gore administration and then spent two years traveling with Al Gore’s presidential campaign. Bill was one of the few journalists who stayed in Florida to cover the entire 36-day election standoff.

As a Political Analyst for Fox News, Bill Sammon has appeared on: Special Report with Brit Hume, The O’Reilly Factor, Hannity & Colmes, Fox News Sunday, The Beltway Boys, and The Edge with Paula Zahn. He has also appeared on: MSNBC’s Hardball with Chris Matthews, NBC’s The McLaughlin Group, CNN’s Reliable Sources, and C-SPAN’s Washington Journal, as well as such radio shows as Oliver North and Jim Bohannon. He also gives speeches for Keppler Associates, one of the world’s largest speakers bureaus.