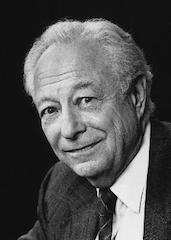 Irving Kristol was one of the great essayists, editors, and public intellectuals of the twentieth century, was at the center of a transformative force in American politics and thought: neoconservatism. His own writings, as well as his founding and editing of the important quarterly, The Public Interest, were crucial to the emergence of the neoconservative movement.

Kristol was born on January 22, 1920, in Brooklyn, and lived most of his life in New York City. He received a B.A. from the City College of New York. After serving as an infantryman on the European front in World War II, he joined Commentary magazine as managing editor.

In the 1950s Kristol founded the journal Encounter, and edited the biweekly magazine The Reporter. He served as executive vice president of the publishing house Basic Books in the 1960s, and founded the quarterly The Public Interest in 1965. Kristol served as the Henry Luce Professor of Urban Values at New York University from 1969 to 1987, and he was the John M. Olin Distinguished Fellow at the American Enterprise Institute from 1988 to 1999. He founded The National Interest as a complement to The Public Interest in 1985, and wrote a monthly column for The Wall Street Journal for two decades.

In 2002, President George W. Bush awarded Irving Kristol the Presidential Medal of Freedom, the nation’s highest civilian award. He was married to the historian Gertrude Himmelfarb from 1942 until his death in 2009, and the couple had two children – Elizabeth Nelson and William Kristol.